The idiom ‘like herding cats’ could have been invented to describe the process of interviewing Ana Lily Amirpour. Even though our conversation took place on a sodden Wednesday afternoon in an overheated central London hotel, talking to her felt akin to being jammed on a sofa with an affable stranger towards the end of a rambunctious house party, paper cups of wine cradled in our hands.

Ostensibly we met to discuss Lily’s directorial debut, A Girl Walks Home Alone at Night. Given that it is perhaps the world‘s first Iranian-American vampire western, there was much to talk about. Shot in stark black and white and set in a fictitious Iranian ghost town called Bad City, the film follows a 186-year-old vampire known only as The Girl as she makes the acquaintance of a troubled local man.

Beyond her love of music and stylish predilection for wearing a Breton top with her chador, we learn almost nothing about this complicated, aged creature other than she occasionally rides a skateboard and appears to target men who take advantage of women. She is as quiet and introspective as Lily is digressive and enthusiastic. But after many minutes conversing about raunchy band names, malfunctioning abdominal cavities, Twin Peaks and sinister casinos, Lily was finally ready to discuss the film. For the most part. 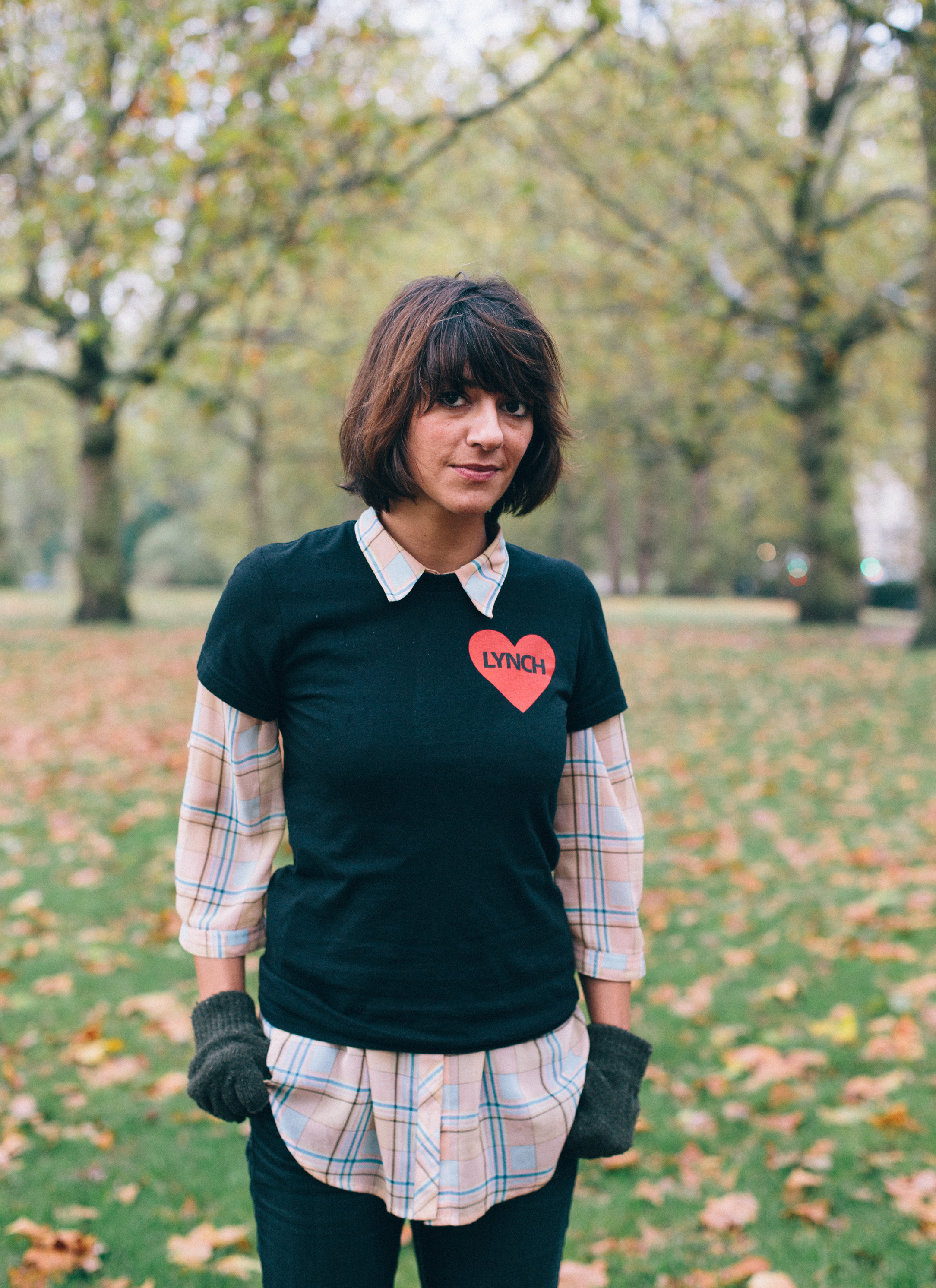 We should probably talk about A Girl Walks Home Alone at Night.

It’s so much more fun to talk about hernias.

I understand. You must get the same ten questions over and over again. Everyone asking you, “Why vampires, Lily?”

Right! Well, we can do that. We can do whatever you want.

I’ve been into vampires since very early. Anne Rice was my gateway drug. Honestly I just really don’t want to die, and I don’t want to get old, and vampires live forever. And they’re lonely.

You shot the film in California, but it’s set in Iran. Why did you choose to have America stand in for the country?

Did you think it was Iran?

I’d read that it wasn’t. But while I’ve never been there, it felt like neither one place nor the other. You could take it almost as being set in an imaginary Iran.

Exactly. That’s good, that’s how I would have answered. Put that. It’s not the real world. It’s an Iran of the mind.

Have you been to Iran much?

I’ve been there once. My film has nothing to do with Iran, though. It’s an avenue into something, and it’s Iranian because it’s an Iranian fairy tale with Iranian characters and I am Iranian, but I’m also a composite of many other things. Making a film is an opportunity to put together the things that you are and live inside a dream and not have the limits or rules of the real world defining it. If it was shot on a sound stage, I wonder if people would ask why it was set in Iran.

I’d argue that one of the interesting things about that choice is the marked differences between the shooting location and the setting. They inspire a creative tension.

People just want answers all the time. I think the questions are much more interesting than the answers.

Do you purposefully want the film to be open to interpretation then? There are definitely political readings of what happens but are you looking to create ambiguity?

I want whatever you get. Once I create a film it doesn’t belong to me anymore. It’s like a mirror, and each person brings what they are to it. You see things of yourself in a movie. My feeling and your feeling of the same exact film are going to be different and that’s what’s great about cinema. That’s why it’s more interesting to hear what you think than for me to tell you the stuff that I was thinking when I made it.

I wanted to ask you about Madonna because there’s a picture of her on The Girl’s wall.

Do you know who that is? It’s not Madonna. The face was changed because I couldn‘t get permission to use all those music posters she has on her wall. It’s actually the face of Margaret Atwood. I met her at San Diego Comic-Con before I made the film and she was super supportive of the idea of the film. Then when I was making it, I was told that to get the clearance for the posters we’d have to pay loads of money, so I just changed them. Margaret Atwood was Madonna, Elijah Wood and his two partners in his production company were the Bee Gees. I was Michael Jackson. It was so fun doing that.

Do you think that turns the film into even more of a side-step from reality?

Yes, it makes an alternate, Bizarro version of the real world. I think the little details are really important, like the character Arash’s watch is always at high noon.

That’s actually why I wanted to bring up Madonna. There’s a moment in the film where The Girl says she isn’t religious. In the Catholic faith people put the Madonna on their walls, and instead The Girl has a pop-culture Madonna on hers. I was wondering if that was an intentional allusion.

Wow, I never heard that. See, this is why I love movies. I recently realised why I hate E.T.

I shit my pants when I was a kid and saw it. I was terrified. And I was at a festival in Spain and met a filmmaker called Carlos Vermut. We had this big conversation about life and weirdness and madness and movies and everything, and I was talking about E.T. Did you like E.T.?

Very much so. But it’s okay for other people to not like it.

I didn’t hate the movie, I hated the alien. From the moment I first saw it, I felt wrong. I never thought, “You’re cute, let’s be friends.” It was always, “Run for the hills!” Carlos figured it out. He said,“You don’t like old people. E.T. is an old man, and you made a vampire movie and you want to live forever.” I thought, “Holy shit, dude, you just saved me ten years of therapy.”

I’d like to be politically correct, but I can’t help but tell you what I think. I don’t dislike them. I don’t hate them. It’s not like that. I’m afraid of them and I think they’re gross and I don’t find them attractive. I find old people a looming, tangible sense of death. I feel like they’re an advertisement for death. Decaying, rotting inside your own body. And they smell bad. I mean, I like my grandma, but she’s gross, you know?

I’ve never been comfortable with that and I don’t know that I ever will, and I’ll become one unless a vampire comes along and rescues me from it. Or if they come up with a nano-shot where they can inject you with something cell-rejuvenating. I don’t want to die. Death is a part of everything, because everything dies, but fuck! I don’t care how many beautifully-lit photos you take of wrinkled faces, it’s just a photo. It’s not real. Go to a hospital and see what old age really smells and looks like. It’s not tasty or savoury.

You mentioned to me before that you’ve already seen fans dressed up as The Girl. What’s it like to have created a character and then have it develop a life of its own?

It’s crazy! I was talking to my dad about it a couple of days ago. It’s funny because I always say that I’m a very personal filmmaker. I’m interested in trying to figure out who I am. That’s all I’m really trying to do. So it’s cool to think that something that you do can affect someone in a weird way. In the film I’m not trying to be political or say something about women or Iran. Anything that’s happening is something I’m thinking in my own head about who I am as a weird human being on earth. Then my dad said I was changing the way people look at chadors on a massive scale, as people will associate this religious thing with something completely different now. It kind of freaked me out. Are you suffering?

What do you mean?

The heat. Are you?

Humid. But it’s good. It puts us in a fever dream state. Would you do it, if a vampire came and gave you the choice of being a vampire? Have you ever thought about it?

I think you should take some time over your answer.

It is a big question. I’ve been thinking about it since I was nine, so I know.

The idea of murder and blood doesn’t particularly appeal, but I’d rather not die.

I’d rather not die too! And I imagine some part of me would be like a cheetah. I don’t think a cheetah feels bad when it kills an antelope. A vampire is part human so of course there’s the guilt, but it’s better than lots of other ways I can think of dying. Taking something’s life in a very meaningful way, versus having a stroke? There’s no contest. Dying at the hands of a vampire isn’t a bad way to die. It’s pretty magnificent.