The tyranny of popcorn is largely due to good timing. Evidence of its consumption dates back to 4,700 BC Peru, but the snack’s most significant development came in 1893 with Charles Cretors’ invention of the mobile popcorn popper, three years before the first permanent cinemas. As popcorn was already popular at the fairs and carnivals that showed the earliest films, its subsequent availability outside the first movie theatres meant that popcorn and cinema-going would become inextricably linked. Thanks to serendipity and the efforts of one innovative confectioner, a fad in snack food became forever associated with the major art form of the twentieth century. It’s as if we associated sculpture with Cheestrings, or literature with Push Pops.

Given that I’ve spent much of my professional life writing about film, the information that I don’t like popcorn tends to surprise people, which is further testament to the hold that exploded maize has upon our cinema-going psyche. Popcorn has the field largely to itself, its chief alternatives being sallow, lugubrious hot dogs and financially ruinous bags of pick ’n’ mix. In the hope of discovering an acceptable replacement, I headed to my local cinema with an array of potential usurpers concealed within my rucksack’s Tupperware-filled innards.

I decided to forsake the usual candidates and contemplate the previously unthinkable. If chocolate-covered raisins haven’t dislodged popcorn in a century they’re not going to start now. 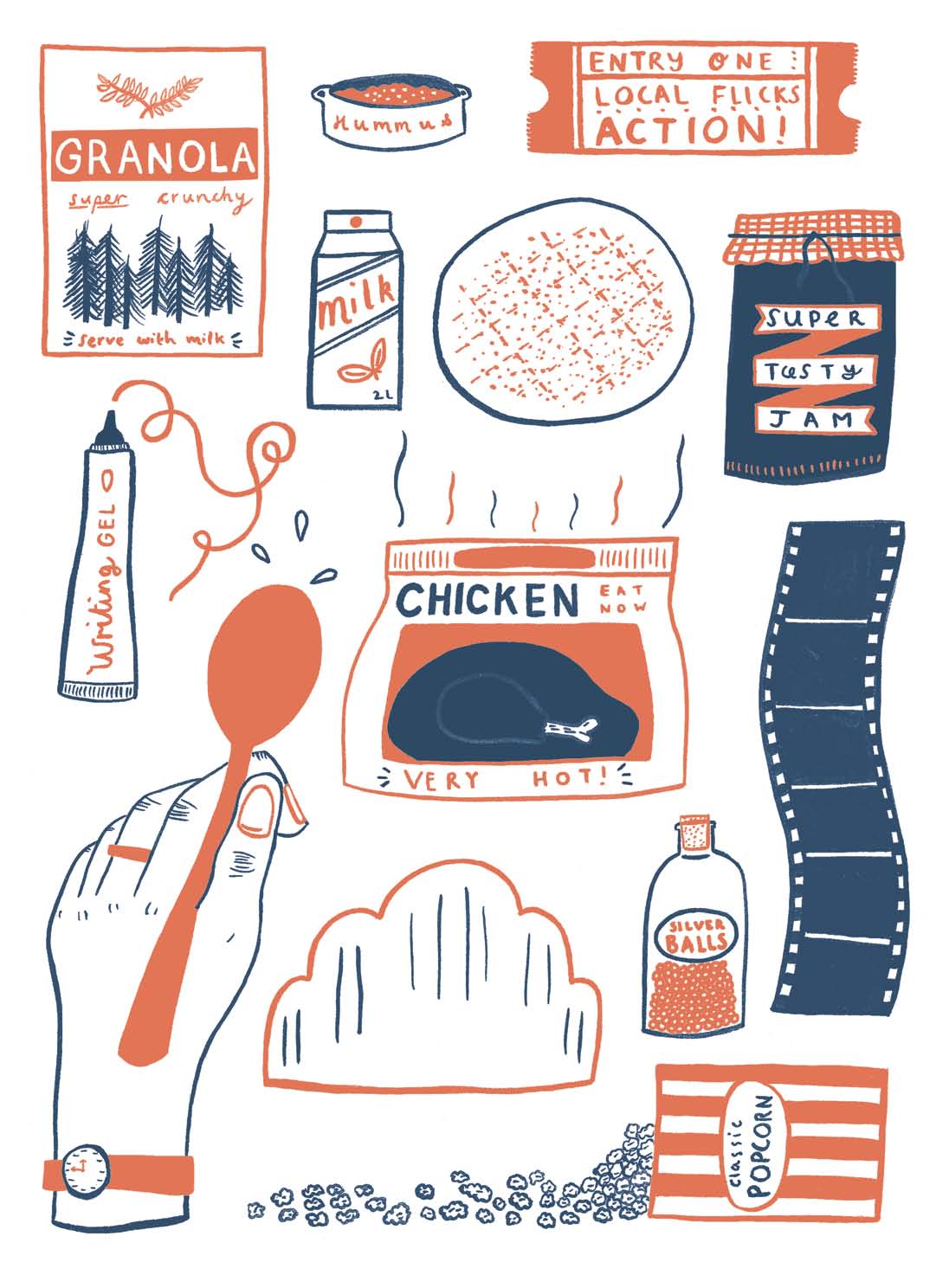 half a roast chicken

Even when it has arrived pre-heated in a foil bag from a supermarket, there’s something about holding a roast fowl in your hands that makes you feel like you should be wearing ermine and initiating the Reformation. There’s a ghastly splendour in such a primal display of eating, and the first full bite of chicken breast was divine. Unfortunately the pleasure waned as the thrill of Tudor gluttony was replaced with greasy fingers, bones that needed disposing of and a smell that I felt certain was seeping out of the theatre and into the waiting nostrils of the underpaid workers in the lobby. Disappointed and paranoid, I hid the chicken in the bottom of my bag where its scent lingered accusingly for the rest of the feature.

In the dark of a cinema, a loaf of bread can seem limitless. I spent a whole act or more of the film tearing off strips of pide and baptising them with hummus, almost forgetting that I had several other foods still to try. When I finally looked down at my lap during a particularly dull section of the particularly dull movie, I realised I’d eaten nearly half of the loaf by myself. The lesson is that pide is delicious but dangerous, much like a cake that tries to mug you.

a bowl of cereal

I don’t have any proof for this beyond my own unreliable ears, but I believe that the act of eating popcorn is louder than the act of eating cereal. Nevertheless, once you emancipate yourself from the bonds of conventional movie snacking you become aware of every rustle, crunch and squelch you produce, which makes cereal consumption a distinct trial. Did you know, for instance, that milk makes a sound when poured into a bowl of cereal, and that this sound will seem deafening when occurring during a scene of dialogue? I was already feeling bad enough about the tenacious poultry smell without the bane of noisy milk. For all of cereal’s difficulties, however, eating it in a cinema is actually a treat. It briefly made me feel like I was a youthful, pyjama-clad version of myself sitting in front of Saturday morning cartoons, rather than the one sitting in a nearly-empty cinema on a weekday afternoon watching something tedious and ultraviolent. If only a bowl of cereal didn’t require quite so much assembling.

It’s difficult to understand that eating jelly in the dark is an acquired skill until you discover your own inability to acquire that skill. I had underestimated how tough the substance is to eat when it isn’t sitting captive in a bowl next to melting ice cream. At my first attempt, a sizeable rhombus of jelly slid from my plate and bounced off my foot. Later, after the film had mercifully ended, I tried to locate the gelatinous lump using the glow of my mobile phone screen, but to no avail. It may be there still. The surviving jelly was excellent, but I’m not sure if it’s worth the danger of getting barred from my local cinema. Without films in my life, I’d probably have to take up swing dancing or join a street gang.

Multitudinous, tiny, comprised mostly of sugar and carried in plastic tubes with apertures ideal for pouring into your hand, cake decorations would seem perfectly designed for movie snacking. A pick ‘n’ mix to be found in almost any kitchen. Sadly, though, eating cake decorations is much like exposing yourself to radiation: you can only do it in small doses, after which you begin to feel sick. The only actual variety the decorations offered was the different ways in which they disappointed: the silver dragée were too hard, the confetti dots too flavourless, the writing icing gel too sugary. With the film almost over and hundreds and thousands of hundreds-and-thousands left uneaten, I placed another unsatisfying sugar butterfly into my mouth and thought wistfully about Tangfastics.

Like talking to myself in public or having day-long baths, eating jam on its own is something I’ve always assumed I would do if it were socially acceptable. In the chintzy casino in my head, I’d placed all of my imaginary money on it being the superior cinema snack. Jam is possibly the best thing you can put in a jar, and certainly the second best thing you can spread on toast. Just after I had my first spoonful, however, something happened: I didn’t really want to eat jam any more. Possibly it was because I was consuming the foodstuff by itself. Possibly it was because I’d already eaten half of a loaf of pide, a bowl of cereal, masses of cake decorations, a plate of jelly and half of a roast chicken. It’s hard to say. My stomach was filled with what I could only assume was disenchantment. In a pained effort to recover some dignity on jam’s behalf, I tore off a chunk of pide and dipped it into the jar. The transformation was instant. With its fruity sweetness balanced by the bread’s elegantly obliging accompaniment, the jam tasted exactly as it was meant to: like a summer morning where the world seems alive with possibility. Society was right. It didn’t matter that the film was terrible or that I felt unwell. I had a jar of jam, and everything was going to be okay.