Growing up with a sibling is like winning a prize at a village fête tombola that you didn’t actually enter: hopefully you’ll get something decent, but there’s a fair chance you’ll end up with a tin of pineapple chunks instead. Through an essentially random process, you’re assigned someone who is supposed to be one of the closest people to you, with whom you’ll share not just genetic material but a household, a family, and your youth. Who knows whether or not you’ll actually like each other?

The stultifying proximity of childhoods and adolescences can accordingly make a sibling one of the most complicated relationships in one’s life. This can be a source of comfort and joy, but also mutual agony: there’s no-one like a sister or brother to transform you into the 14-year-old version of yourself. At its best, this means silliness, solidarity and a sense of playful competition. At its worst, you both revert to your worst incarnations, and misery blossoms. Making a sibling relationship work can be hard enough, therefore, without adding public scrutiny, duelling careers, Oscar ceremonies and Adolf Hitler into the mix, as shown by the contentious and compelling lives of two sets of famous sisters: Olivia de Havilland and Joan Fontaine, and the Mitfords. Given that the Golden Age movie star Olivia de Havilland is 99 years old and still alive, it could be argued that the publication of her last will and testament in her high school newspaper was somewhat premature. She was, at least, nothing if not generous: “I bequeath to my sister the ability to win boys’ hearts,” Olivia wrote, “which she does not have at present.”

Her sister Joan was accustomed to such barbs. Born fifteen months apart, the siblings fought viciously for their entire childhood: they would taunt each other, pull out one another’s hair, and whenever it came time for Olivia to pass down her old clothes, she would rip them to bits first. By the age of 9, Joan had already plotted out her sister’s murder, aiming to “plug Olivia between the eyes.” As adulthood approached the physical quarrels fell away but the enmity between the sisters remained, a situation which wasn’t helped by them both deciding to become actresses, or from their mother barring Joan from using the family name because Olivia was already doing so.

What was perhaps the apogee of their feud took place on 26th February 1942 at the 14th Academy Awards. Seated at the same table, Joan and Olivia were both nominated for best actress. The winner was Joan, who later recalled her sister’s response in her memoir: “ ‘Get up there!’ she whispered commandingly. Now what had I done? All the animus we’d felt towards each other as children, the savage wrestling matches, the time Olivia fractured my collarbone, all came rushing back in kaleidoscopic imagery. My paralysis was total. I felt Olivia would spring across the table and grab me by the hair. I felt age 4, being confronted by my older sister.” Olivia resisted one last hair pull, but when she finally won her own Oscar five years later, she refrained from shaking her sister’s hand. “Our relations have been strained for some time – I couldn’t change my attitude,” she told a reporter. “Maybe she didn’t see me,” Joan told another.

The exact history of Olivia and Joan’s fractious relationship is difficult to establish because their version of events often diverged wildly. Joan, easily aggrieved since youth, was more willing to discuss the matter publicly and keen to portray herself as the victim. The reality was probably a little more nuanced: they were two equally competitive, unsentimental and talented sisters whose early animosity carried over as they pursued the same career. Although they’d never be able to admit it, they were as bad, and as good, as one another. Their relationship sputtered on until 1975 when a row over their dying mother caused them to stop speaking for good, and they never managed to reconcile before Joan’s own death in 2013. The timing might have given her a certain grim pleasure, as in a 1978 interview she said: “I married first, won the Oscar before Olivia did, and if I die first, she’ll undoubtedly be livid because I beat her to it.” 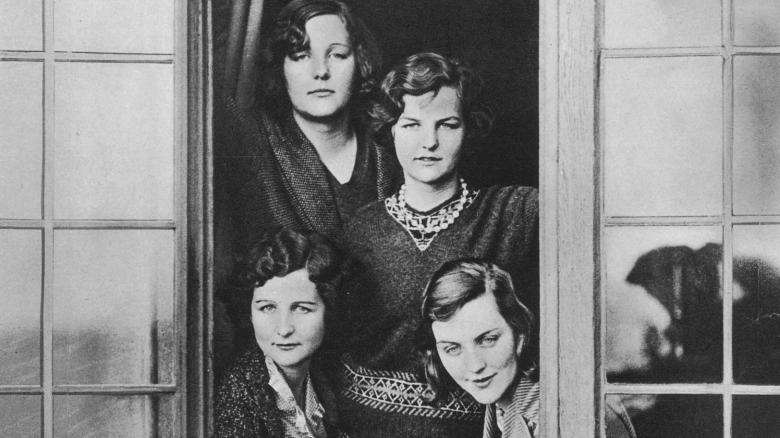 The question is fraught with peril: even though there were six Mitford sisters, you still have a 33% chance of picking a fascist. Half a century on from their famous and infamous heyday, Nancy, Pamela, Diana, Unity, Jessica (known as Decca) and Deborah continue to intrigue, charm and repel, precisely because of the yawning differences between them. While they all grew up in the same eccentric aristocratic family, their lives a tangle of nicknames and secret languages, they ultimately took disparate paths.

This can be best illustrated by the political abyss that divided Decca and Unity: in her youth, Unity carved swastikas into the windowpanes of their home, and for each one Decca countered with a hammer and sickle. Later, Decca eloped with a cousin and fled to fight the fascists in the Spanish Civil War, while Unity moved to Germany to become one of Hitler’s closest friends. Even later still, on the day World War II started Unity shot herself in the head with a pistol given to her by Hitler; although she survived to live for another nine years, the doctors couldn’t remove the bullet and the brain damage was debilitating. Decca, meanwhile, emigrated to America to become a crusading investigative journalist and civil rights activist. Living a principled but irreverent life that would have baffled her sister, she counted Maya Angelou among her closest friends and in her late seventies starting a cowbell-and-kazoo orchestra called Decca and the Dectones.

It wasn’t just Decca and Unity who stood out: at every turn, the Mitford sisters went their own way. In the “fascist branch” of the family, Diana married Oswald Mosley at Joseph Goebbels’ home, with Hitler serving as guest of honour (he gave them a picture of himself as a present, as he was a terrible wedding guest and person.) Nancy, an incisive comic writer best known for her semi-autobiographical classics The Pursuit of Love and Love in a Cold Climate, spied on her sisters for MI5 during the war, and later left a feckless husband in England for a philandering lover in Paris. Deborah became the Duchess of Devonshire and was happy to spend most of her time writing about and restoring the stately home Chatsworth. Pamela was conspicuous by being inconspicuous: she is portrayed as the unassuming, quiet one by virtue of having lived a relatively normal life, give or take an atomic physicist husband and a forty-year relationship with a Swiss-Italian horsewoman.

There are many reasons why the “Mitford industry” (as Decca called it) has endured, outliving all six sisters, but fundamental to its appeal is the idea that these women were incredibly different yet still tied together. While their contrasting fortunes reflected the chaos of their disintegrating aristocratic class, they also demonstrated that a family can tolerate individualism, and is indeed more vibrant because of it. Even though there were massive schisms and their lives were frequently tragic, none of the Mitfords could be described as a black sheep. Instead, they were a family of black sheep, each fiercely determining what was right for them. They were undoubtedly aided in this by their privilege, and at least a good third of them were wrong and mad, but their fortitude inspires nonetheless. As I waited for the results of the online quiz – which I definitely didn’t cheat on to get Decca – I was reminded that regardless of which Mitford sister I turned out to be, we all have the freedom to be the people we want.