Without even noticing, you invest emotional energy in people who create things you like. Regardless of whether they are musicians, writers, film-makers or something else entirely, they assume a function in your life akin to a favourite sports team: you take pride in their accomplishments, defend their honour against the unconverted and become disheartened when they stumble. You root for them. You love to see them win.

This instinctual solidarity makes the arrival of that familiar sighing sensation in the chest especially disappointing, as you discover you’ve seen everything they has to offer. While there’s pleasure in watching them return yet again to the territory that was so exciting originally, it is also dispiriting to realise that they’ve run out of new things to say and new ways to say them.

Despite regularly inhabiting different characters, actors aren’t spared from this fate either. Being typecast is a lurking hazard of the job: when you demonstrate you’re good at one type of thing, people want you to keep doing it. Viewed in this light, Maxine Peake’s career is even more impressive. It would be easy to imagine how she might have got snagged on the success of her early comic roles in dinnerladies and Shameless, subsequently becoming doomed to play variations of “brassy and bombastic Northerner” until retirement age. Instead, Maxine’s vital, daring performances chart new ground as she has embraced the challenge of portraying everyone from Hamlet to Myra Hindley. You never quite know what she’s going to do next, but it’s always worth a look. That sighing sensation is thankfully absent.

As these thoughts bobbled around my head, I took Maxine to the most echoey corner of the Barbican for a chat. 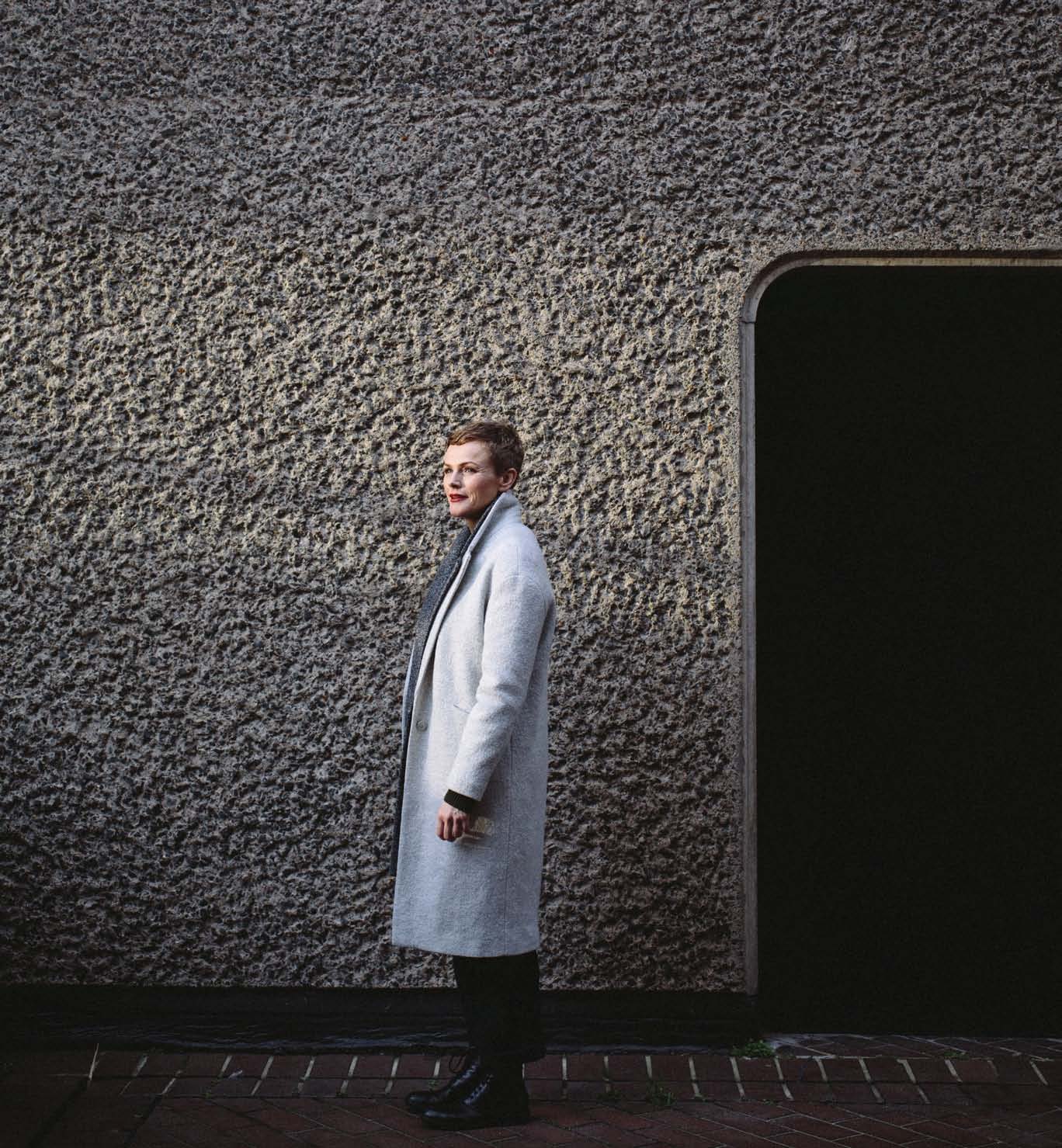 Given this issue’s theme, I thought it might be nice to talk about the idea of change in relation to your work. Acting can change constantly, can’t it? Is that a part of the appeal?

Definitely. I find it difficult to stay in my seat. When I’ve done a few series of a programme it becomes really hard to come back to a character, to attack the same person again. Even though the audience might not notice, I’ll have slightly changed in the months since we last filmed, or I’ll have different ideas about the part. My attention span is quite short. I don’t want to get bored doing something and become complacent. I tell myself that I’ve done that thing now: successfully or not, I’ve ticked that box. It’s time to move on.

Was it difficult earlier in your career to establish that you didn’t just want different projects but different kind of projects?

Yes, and it might have been an easier career if I’d said okay, this is what I do now. After I played Twinkle in dinnerladies a lot of scripts came in that were substandard Twinkles, but I’d already been the proper one. I just had to tell them I wasn’t doing any more of those thank you very much, even if it meant I probably wasn’t going to work for a bit. You have to try to steer the boat yourself. I’m usually looking for a challenge. If I get sent something and don’t know why they think I can do the character, that’s usually why I have a go. “I don’t quite get this one yet. Great!”

Is that why you moved from London to Salford?

It gave me more artistic freedom really. I suppose it gave me more time. It took the pressure off. I just remember thinking if I bought a flat in London I’d feel trapped. I would have to do jobs to pay a mortgage. Of course, most people get up in the morning and go to work because they have to. It sounds arrogant but I didn’t want to get stuck doing that. It depends what you’re in it for, and for me it’s never been the money. I wanted to be able to pick and choose what I do. There’s little worse than being two weeks into a shoot, wishing you’d never said yes and you’ve got months to go. It’s got to be fulfilling for me to get something out of it.

In that case, what’s fulfilling about your role as an Associate Artist for the Royal Exchange Theatre in Manchester, where you also played Hamlet?

It’s the luxury of being able to have a creative partnership with Sarah Frankcom, the artistic director. To have that building where we can ask ourselves what do we want to do, and then do it. I don’t want to hog the theatre, or for people to think oh no, not Maxine again, so we try to keep it sporadic and do a piece together about once a year. I feel really blessed about it. Someone asked me recently how much of a feminist statement Hamlet was, but it didn’t start as one. Me and Sarah just said let’s do something where we really have to push the boat out and it’s going to frighten the life out of us. The scarier the better, you know? So Hamlet came out of us asking what is one of the most difficult and monumental pieces of theatre we could do. I’ve got this opportunity, so why not push myself? And it’s amazing what that play can absorb. I played Hamlet as trans: a character who was born a woman but felt more comfortable in a male body, and the play took it. It seems to be able to support whatever themes you throw at it or whatever route you decide to take. As well as acting you’ve also started to write plays over the past few years. Is that a part of the same process?

Yes, it’s been about feeling able to have a go at what I want to do. I spent a lot of my early years being very self-conscious. It’s not that I was under-confident, but now I feel more secure people will actually take a bit of notice because of the body of work I’ve got behind me. I wanted to write when I was younger but I just thought, well, who’s going to take me seriously? It’s not that as you get older you get more confident, it’s just you care less. What’s the worst that can happen? Nobody’s going to die. It was like that with Hamlet. It could have been a disaster. People could have said it was the worst Hamlet they’d ever seen. So what? Obviously you want to do things that people like because they’ve paid their hard-earned cash to see you, but you’re allowed to try new things.

Does that shifting attitude apply to being a public figure too? In recent years you’ve spoken out powerfully against austerity: is that something you feel more comfortable doing?

I’ve sort of always been that way, but people pay more attention now. I remember when I would do interviews for Shameless: I’d talk about being in the Young Communist League when I was 18, and they’d ask me how I lost all the weight after dinnerladies. Nobody was particularly interested in a young northern female talking about politics. I suppose I’ve banged on long enough now that people ask me about it. For me it’s all tied in. When I read a script, I ask myself questions. Is that character is a female role model? What are we saying? What’s the message in this piece? It’s all linked, so I thought I might as well be open about it. I think television especially has an important part to play in changing perceptions. We need to get with the programme and show Britain as it is, this amazing multicultural melting pot with people from all walks of life. I find it so frustrating. You watch telly and so much of it doesn’t reflect us. There’s still gender stereotyping, class stereotyping, race stereotyping. We’re not putting a magnifying glass up to Britain and I don’t know why. How are we still so very behind? Do you feel an obligation to take roles in socially progressive projects?

I do. It’s funny, what I find now is that scripts are getting much more female heavy, but I’m not sure if the parts are actually getting any better. You get some amazing female parts, but at the moment I get offered a lot of women in their late 30s, early 40s: last stab at childhood, last stab at a family. Me and my friends are in that age range and that’s not what we sit around and talk about. There’s more to women. Come. On. Female writers can be just as guilty of it. This is why doing things like Hamlet’s cross-gender casting is important. Women don’t have to sit and suffer in silence and say, well, I’m at that age where there are no good female parts. Grab yourself a good male one and go and do it!

What would you like to do next? Do you look ahead to where you might want to be in the future?

I would like to continue. More theatre, film, good television. Just to be able to carry on doing scripts that I want to do. It’s more difficult as you get older. I guess that’s where the writing comes in, and theatre as well. My dream when I was younger, and it seemed like a dream because I was a working-class oik from Bolton, was to be a classical theatre actress. I wanted that but I was never quite confident enough to vocalise it, so I went all around the houses. Now I’m starting to do the theatre that I really want to, and it’s taken me over twenty years to get here.