Noah Ward owns a suspicious number of books for someone who can’t read. In his defence, he is seven months old and only recently got around to learning how to laugh. How can one be expected to read, Noah might argue (if he were capable of speech or standing without assistance), if one is unable to laugh at the words?

My dashing young nephew is unaware of the commitment I have made to his future, which is probably for the best as that commitment is to thoroughly indoctrinate him. The nefarious plan is simple: for every special occasion in Noah’s life I will give him a book. Birthdays, Christmases, rainy bank holidays, bouts of chickenpox. Maybe even Whitsun if he’s lucky. If all goes well he’ll eventually be able to swim in his collection like a miserly Scottish mallard. I’m aware that it’s likely he’ll love this at first and then hate it, but hopefully he’ll eventually come back to it again. If he doesn’t then at least Dumfries’ charity shops will remain well stocked.

I knew instinctively what the first book would be: Letters to Anyone and Everyone by Toon Tellegen. The Dutch writer and poet has written more than 300 animal stories across a quarter of a century, and it’s surely a crime that his work is virtually unknown here. Letters to Anyone and Everyone covers all manner of peculiar correspondence: an elephant writing to a snail (“May I invite you to dance with me on top of your house? Just a few steps?”), a sparrow writing to a crow (“I think you squawk beautifully. Sadly, but that’s what makes it so beautiful”), a squirrel writing to a letter (“It feels very strange to be writing to you, because you get bigger as I write”), a mole writing to himself (“Dear Mole, Yours sincerely, The Mole”). Funny, whimsical and surreal, Tellegen’s stories reveal themselves to be full of great longing and melancholy. They are striking in their simplicity: there is only one forest, one river, one ocean, one oak tree.

I chose the book not just because it contains the precise kind of magic common to the finest children’s literature, but because it depicts a world that venerates cakes and letters and dancing and kind gestures. A world where it’s okay to be sad, and okay to be happy, too. A world that Noah might seek for himself one day, when he is older and finally masters compound sentences and waving. 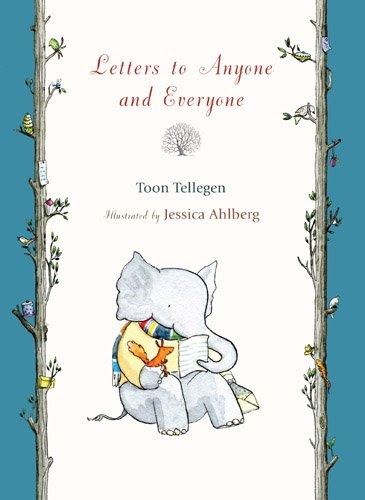