It was clear that we weren’t all going to make it. Something had gone wrong on our way to settle a new land, and now the aircraft was plummeting towards the ocean and our near-certain deaths. We were carrying too much weight: unless someone was abandoned to the frigid waters below we would all surely perish. There was the scientist, the farmer, the doctor, the teacher, the builder, and me: the comedian. We each had to make the case, Mrs Thomas said, for why we would should be allowed to live. What useful skills did we have? What could we oﬀer humanity? What made us more valuable than our fellow passengers?

In turn each of us addressed the rest of the class. I cajoled and persuaded. I told jokes. I was warm and optimistic. I ran down my opponents while appearing magnanimous. I didn’t believe a word I said, and I was brilliant. An eleven-year-old farmer was tossed into an unforgiving sea. Surviving that hypothetical disaster—when I clearly should have been thrown to an icy death—remains my proudest achievement. I’m acutely aware, however, that adults would be harder to convince.

If society crumbles, what help can I provide? I bake a mean clafoutis and saw Never Been Kissed twice in the cinema. That’s about it. I can’t even fix my bicycle. To be honest, I don’t really know how the internet works. If it stopped functioning tomorrow I’d have no idea how to rebuild it, let alone an oven, dentist’s chair or steamship. I’m standing on the shoulders of giants, trying to think of a good tweet.

In an eﬀort to develop some usefulness for the cruel future that hopefully doesn’t await, I decided to learn how to make fire without conventional aids. A turning point in the history of mankind, fire is seen by many early civilisations as being akin to magic, a miracle to be stolen from gods. It seemed like a good place to start. 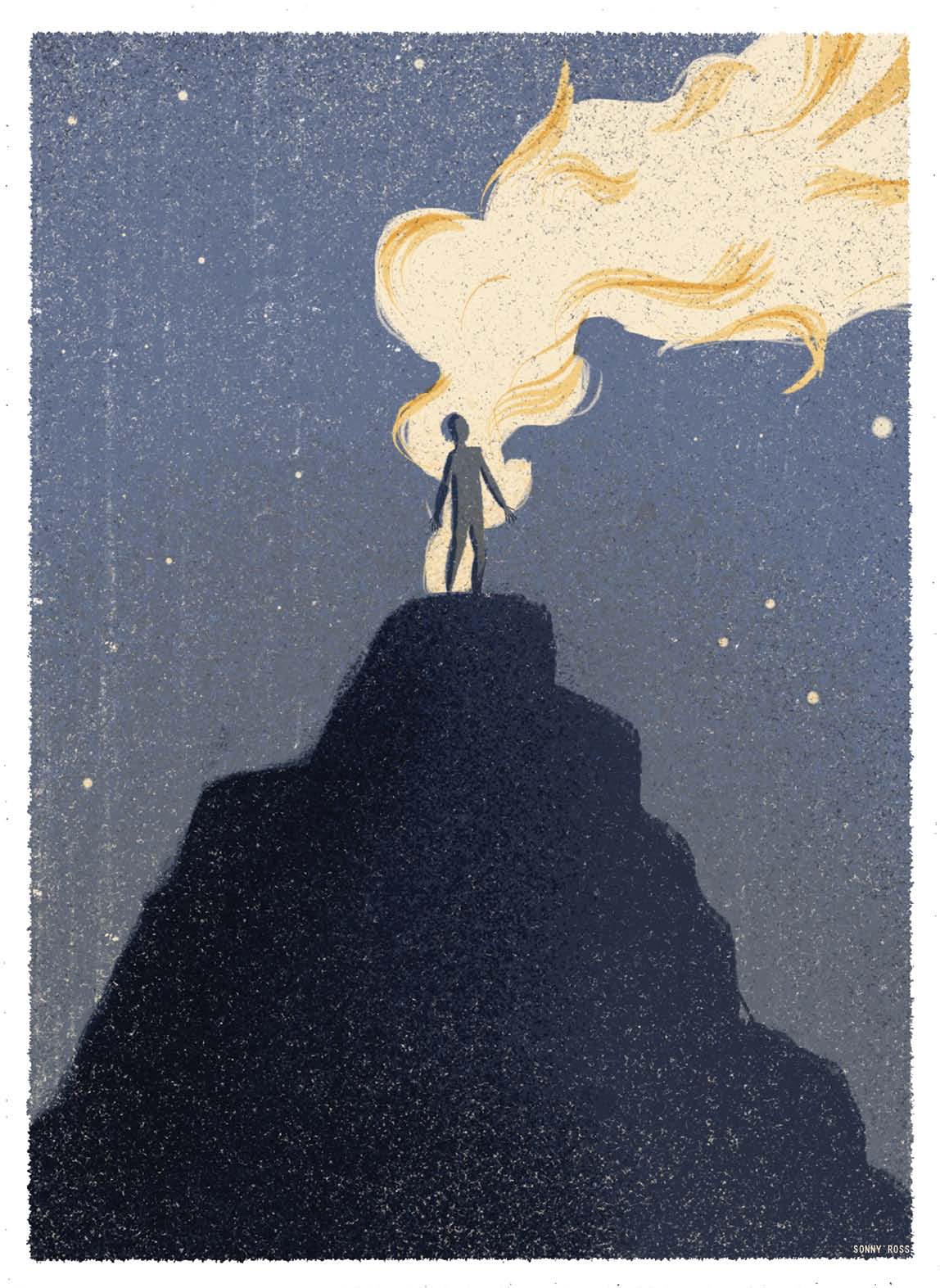 Out of the many possible fire-starting methods, from friction to neglecting a chip pan in a public information film, harnessing the sun’s rays appealed most. It provides the hardy mien of outdoorsmanship without having to endlessly rub sticks together. The principle is both simple and proven: using a lens, sunlight can be focused onto a patch of tinder to start a fire. As I considered a magnifying glass cheating, I turned to a survival guide for inspiration. I was immediately drawn to the idea of ice, which seemed to repudiate nature itself. Surely no one was going to use me as sacrificial human ballast if I could make fire with just water and my own marvellousness.

The guide recommended using ice from a nearby creek, which seemed ambitious given that it was August and I live within Zone 2 of the London Underground network. I froze a bowl of water instead, occasionally shaking it to avoid air bubbles, and ended up with something that looked like an oversized melting contact lens. With the assistance of an oven glove, I held my bespoke loupe proudly above the kindling, excited for the coming inferno. And then I dropped it. My dreams skidded across the patio in discrete, liquescent shards. 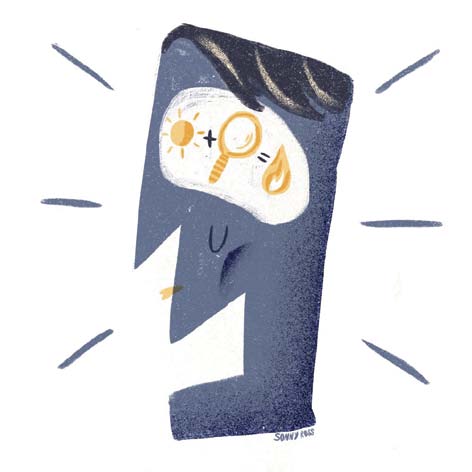 Commonly known as The Walkie-Talkie—as all London buildings above a certain height are now required by law to be named after random objects—20 Fenchurch Street recently became famous when it melted parts of a car. Like a 37-storey block of ice being held by an equally large oven glove, its concave shape and bank of flat windows concentrated sunlight onto a parcel of street below, creating a temperature high enough to melt black plastic and cook the eggs of waggish reporters.

Taking this as encouragement rather than a dire portent about ill-conceived city planning, I placed a large mirror on the side of my house, angling it towards the garden. By this point, unfortunately, the sun had given up on waiting for me: instead of a sunbeam the mirror just reflected an overcast sky that mocked my audacity and threatened rain. I needed a new approach, or a very old one: it was time to rub sticks together.

I enjoy my garden. Between its three fences I’ve planted flowers that haven’t grown and vegetables that have, hosted barbecues where I’ve drunk too much, read books, written things, kissed people. For much of the year it is a reliable source of mint and thyme, and there’s a tree at the back that I’m convinced is the largest oak in my electoral ward. Of the many hours I’ve lost there, the least enjoyable is almost certainly the one I spent rubbing a stick against a bit of wood with an aching hand and a dimming sense of hope.

The hand drill method doesn’t in fact involve a hand drill. Instead, you roll a spindle against a fire board until the friction creates an ember. It is both the earliest and most challenging of all fire-starting techniques. Scholars of mythology have diﬀerent theories for why the theft of fire was such a pervasive global myth, but after my long, futile struggle I completely understood why fire would be seen as celestial. My frustration was compounded by a guilty feeling that I was failing a key tenet of self-suﬃciency. In my inability to measure up to my ancestors, I was less of an adult, less of a man, less of a human being.

I told myself I wouldn’t stop until I’d started a fire, and believed this right until the moment I gave up. 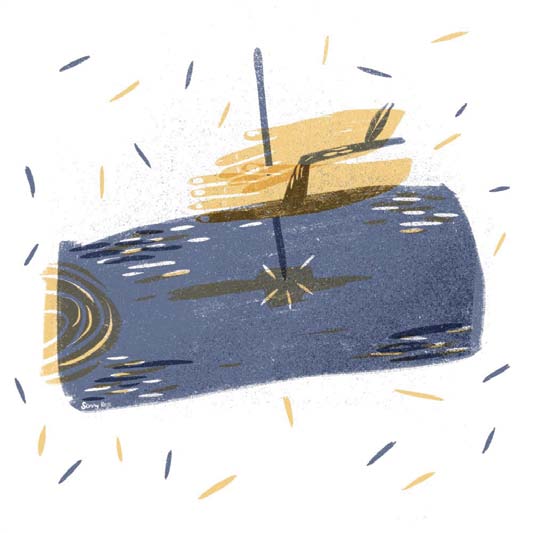 a nine-volt battery and steel wool

There is a person whose job is to dredge Twitter for any mention of batteries. I know this because I once made a joke about their growing obsolescence and within minutes had a response from a battery company pointing out that size Ds are useful in flashlights. I felt strangely contrite, as if I had in some way besmirched the good reputation of batteries.

I feel even worse now. Holding the battery terminals near the steel wool created immediate dots of flame that danced up and down the filament. The sparks disappeared in moments, but with enough patience I knew I would be able to get a fire going. Sure enough, ten minutes of careful guidance led to a small but persistent fire.

After a day marinating in failure it was almost too easy. I couldn’t help but feel disappointed. Given my trials I’d been hoping for some exultant moment of triumph, but in the end it was about as diﬃcult as if I’d used a box of matches. Did it count? Was it cheating? Had I learned anything? What had I been trying to accomplish, anyway?

I sat by the fire, ignoring the warmth of the afternoon. The fire crackled on, oblivious to me. Perhaps I’d been missing the lesson that was to hand. I was never going to be a person who could create flames with just my bare hands, but maybe that was okay. I hadn’t been a scientist, farmer, doctor, teacher, or builder either and I’d still talked my way out of the death that surely belonged to me. If the apocalypse comes, I’ll muddle through that as well. And my clafoutis really is excellent. I just need to figure out how to make it on an open fire instead of in an oven and I’ll be set.