Are you a bit of a know-it-all? Do you dream of a room full of people hanging on your every word? Does your spine tingle at the prospect of wielding a red biro in one hand, a pint of bitter in the other? Yes? Then running a pub quiz could be for you. Jason Ward reveals what it takes to set up this greatest of British boozer institutions… 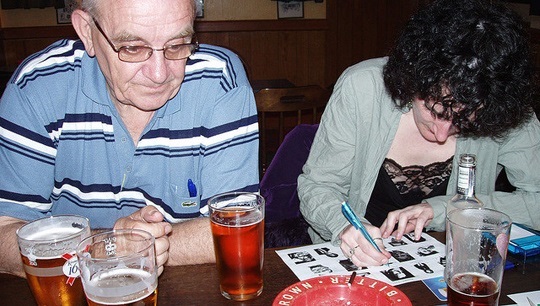 Given their ingenious union of passionate interests with drinking, the growing popularity of specialised pub quizzes is unsurprising. While a quiz can be a great way to fundraise, the best ones can also be creative projects in their own right.

The first step is deciding the topic. Standing out from the crowd helps: when Simon Williams and Lee-Jay Bannister set up their You’re Gonna Need a Bigger Boat quiz ten years ago, film quizzes were a rarity. “It’s weird to think that in 2005 no one else was doing this,” Simon recalls. “Nowadays there are quite a few others, mostly run by cinemas.”

Paul Guided Missile, who runs the Rough Trade Shops Pop Quiz, chose pop music after his friend bought the Lexington pub and corralled him into action. “She set up a deal with Rough Trade Shops whereby shop vouchers would make up the main part of the prize. It was a great endorsement but confusing at first as people thought the quiz was going to be all about Sun Ra and Azalia Snail.”

It’s difficult to walk down a street in Britain without eventually finding yourself outside a pub, but choosing the right quiz venue is crucial. Patience is advised once you do strike gold: “The Old Queen’s Head receives hundreds of requests,” says Stephen D’Arcy, Head of Promotion at the Columbo Group, which owns the pub. “We do get back to enquiries, but there can be a delay due to the number of submissions.”

To give yourself the best chance, then, it’s important to be prepared. Stephen outlines what a venue looks for: “We ask promoters to give us a proposal in as much detail as possible, including an ideal date and time, the amount of people they’re expecting and history of past events. We then review it, decide if it’s a good fit and where it could go in our schedule. There are no rules per se: if we like the sound of the event and have faith in it we’re happy to try it out.”

Write your own questions

“What mighty contests rise from trivial things,” Alexander Pope once said on the side of a box of Trivial Pursuit. Just because a quiz is meant to be fun doesn’t mean that it won’t get incredibly competitive. “Many of the people who come to our quiz are serious film geeks, they know their stuff”, says Simon. To avoid potential embarrassment, it’s best to have devised the question yourself.

“You need to be able to defend your answer if someone has an issue with it. There’s nothing worse than someone pointing out a quizmaster’s error and them saying they didn’t write it.” For a specialised quiz, it’s useful to be knowledgeable about your particular area: “For a film quiz host, knowing a lot about movies helps. If someone thinks you’ve made a mistake, it’s good to be able to explain to them the film they’re actually thinking about.”

Be friendly with the bar staff

Pubs increasingly rely on outside entertainment to attract custom, which means their staff can be faced with a different event every evening. Like staying over at a friend’s house as a child, you have to remember your manners. “It’s important to have a good relationship with anyone you’re relying on to help you do your job,” Paul says.

Aside from being cordial, staff also need the detail of what’s going to happen. Stephen explains what information they need to be provided with: “They must be aware of the event schedule, tech specs as well as more logistical information like ticket prices, sales, door list and number of attendees.” Paul adds one further item: “The pub staff get a copy of the photo round from me, to have a look at if they ever get a spare minute behind the bar.”

Simon believes the key to a good quiz is making sure that everyone can enjoy it: “We’re not there to make people feel that they don’t know anything. Above all it should be entertaining – this isn’t an exam. Even if people score very low we want them to have fun, and we have plenty of regular teams who might not score so well but keep coming back.”

This means creating the right mix of questions, including everything from what Paul calls “giveaways” (“The Beatles were from which UK city?”) to those which will be hard for some teams and easy for others depending on their age and tastes. “Sometimes I’ll throw in a really obscure indie or prog rock question, which people can barely believe is in the quiz and only one person will know the answer to. You can’t get away with many of those, but it’s nice to have one here and there.” Simon suggests one way to level the playing field is having something like an observation round: “Everyone has a fair shot at getting full marks for that one.”

It’s always going to be a challenge to run a quiz in a time when attendees have the entirety of collected human knowledge potentially sitting in their pocket. Along with generally keeping order, Paul thinks one sign of a good quizmaster is having the authority to enforce a no phones rule.

Clarity about what constitutes a correct answer is important too: “You have to know how to deal with the inevitable enquiries, such as if someone’s put down ‘Alex Franz Ferdinand’ instead of ‘Alex Kapranos.’” One way to avoid this, says Simon, is for the host to mark the answer sheets instead of the teams themselves: “It needs to be consistent otherwise it’s not fair.”

“Our quiz is like a little show but I’ve been to some that are essentially just admin,” Paul says. He stresses that he avoids gimmicks, but endeavours to create an enjoyable atmosphere. “I use soundbeds, jingles, catchphrases and have a live music round at the end where I play pop hits on a Casio keyboard. One quiz I played ‘For Those About to Rock’ by AC/DC and used party poppers as the cannons. A couple of years ago, when the Chilean miners were rescued, I played ‘You Raise Me Up’ and hoisted up a model of a miner in a rescue capsule, hand-painted by my missus. It’s important to be entertaining, to make it a spectacle.”

Simon agrees: “I’m confident we’re the slickest-looking quiz out there. We push ourselves to create more and more fancy ways to present questions and clips. We also show the answers up on the screen which is sometimes as much fun as the questions. A big screen is the only way a quiz dedicated to movies should be shown.”