It was a new millennium and my mother was covered in blood. As usual, it was entirely my fault. I should explain:

My best Christmas—aside from the year I was given a puppet of Ernie from Sesame Street—was undoubtedly the one when my parents got me a video camera, somewhere in the middle of my long teenage malaise. I dropped hints for months until finally, wonderfully, they conceded. It was a family camcorder that made everything look like the nightmares of an alcoholic VCR but I was in raptures anyway. Oh, the Cinema I would create! That first night I made an emotional drama starring a bottle of deodorant who comes home to find his wife in bed with a school portrait of my friend Stephen. To this day it remains inarguably the finest on-screen depiction of the relationship travails of deodorant. Orson Welles’ first film was Citizen Kane, by the way. Finding actual human beings to act was tricky, but I was resourceful. I started making films where I played all the roles, one featuring the strangest fight scene you’ll ever see. Better still was when I persuaded a friend to lend me a bag of attic-perfumed Action Men. As a teenager without access to actors, scripts or any intellectual nuance whatsoever, I fell back on the quality that had sustained me through boyhood: violence, and lashings of it. So Action Man chased Dr X around my kitchen until finally he managed to kill him in our deep fat fryer, and an earnest adaptation of A View From the Bridge (starring Dr X as Eddie Carbone and a kitchen counter as Red Hook, Brooklyn) concluded abruptly when I got bored after the second scene and ended the whole thing in a gory shoot-out. These were dangerous times to be around me and inanimate. My films were improving, marginally, but they lacked something human. For that I would need blood.

Blood was the ultimate prop. Anyone could get a newspaper or some food for a character to handle, but blood wasn’t so easy to come by, unless your actors were very Method. It was a sign you’d come prepared, that you were making a proper movie. It made you unpredictable. If the characters can bleed, then anything can happen to them. My only problem was that I knew nothing about making fake blood. I’d used tomato ketchup in my wayward Arthur Miller adaptation, but ketchup could only ever look like itself. I looked online and found a wealth of recipes, but they all disagreed with each other. Overwhelmed with possibility, I turned to the person who had taken me to see Jurassic Park when I was five and thus started this whole mess: my mother.

Being a person that has the co-ordination of a crayon, I had never taken to cooking, and had barely stepped foot in the kitchen except to pillage the fridge or create bizarre Action Man snuff films. It was a relief to have my mother there leading proceedings, and she was unexpectedly game. I think it surprised her as much as it did me. She has a problem-solving brain, which must have been some of the appeal. We would create batch after batch, having long debates about the correct viscosity, and how an arterial wound differed from a graze. For surely the only time in history, the Internet had provided unreliable information, and we were required to improvise, discovering that adding dashes of green and blue dye to red would create a deeper, more realistic hue. Golden syrup made a solid base, but flour had to be added to thicken the blood. I was grateful years later for this discovery of flour’s thickening properties, which has helped me immeasurably in my non-blood cooking. In a sense it was my first cinematic collaboration.

Our quest for the perfect batch overtook us somewhat, and for a long time it was rare to enter the kitchen without a vat of blood on standby. We filled a season’s worth of jam jars with our middling attempts, having to borrow more from my grandmother when we ran out. They stacked up against the kitchen window, and it was endlessly sweet to look through them at our blood-tinted garden. It took a long time to learn that there is no Holy Grail, no one way to create good fake blood. You need different recipes for different uses: a syrup-blend looks great on a corpse, but there’s no way it’ll spurt out realistically. You’re better off dying washing-up liquid and hoping for the best.

The problem with having vats of blood around, of course, is that you feel impelled to use them, and so my films would inevitably feature people cutting themselves randomly on things and bleeding profusely. It was almost a relief when we ran out and the final jars went back to my grandmother. Creating good-looking blood is one of the many skills I possess that I’ll never really need but I’m glad it’s there, lolling uselessly somewhere between quadratic equations and the ability to remove the pin bones of salmon.

To this day my mother looks back at that period with a mixture of pride and bemusement, but they remain some of my fondest memories with her. She knew it was ridiculous but helped me anyway. I think she liked that her own skills could actively help me do the thing I was most passionate about. It was a rare opportunity, one that wouldn’t quite come again. Film-making was my joyous, blossoming world, but for a few weeks we could share it together. She supported me emotionally and practically, and that’s given me strength as I’ve made my way through the uncertain path of a creative life. Occasionally I’ll see a pool of blood in a movie and think of her, and that’s a very lovely thing. 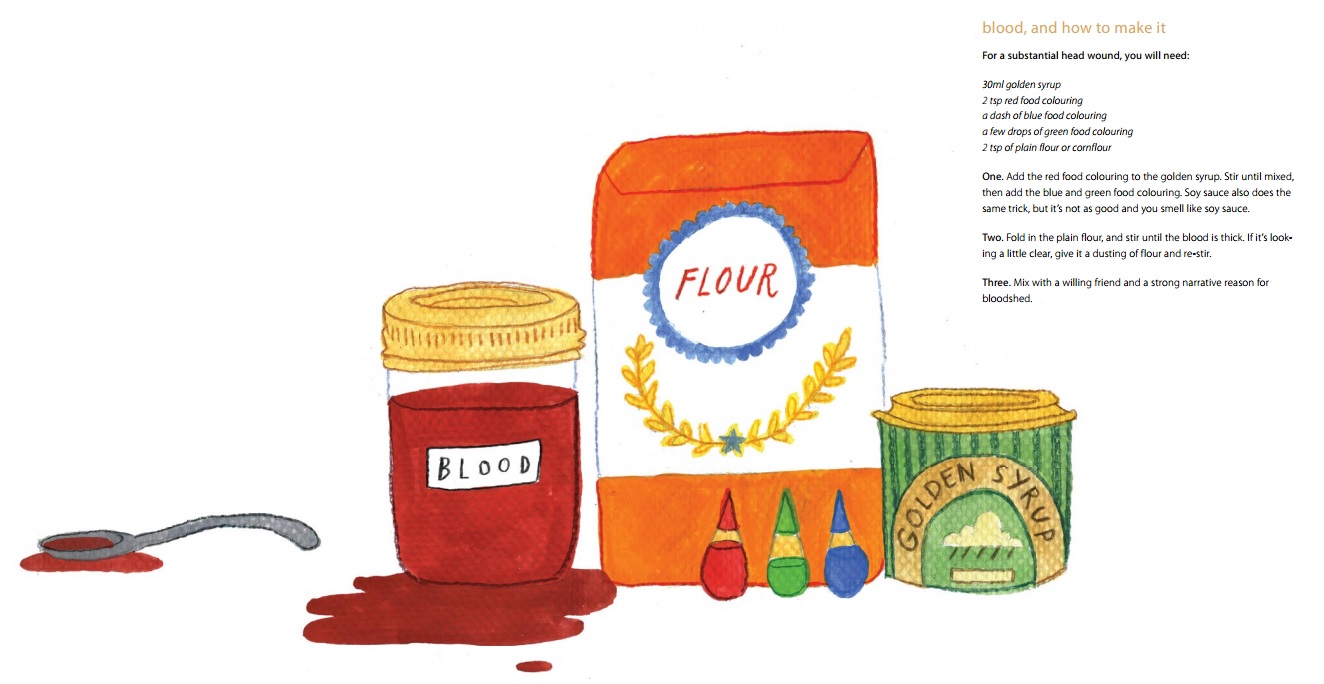