The death of Osama Bin Laden in May 2011 was a major inconvenience for Mark Boal and Kathryn Bigelow. At the time of the fatal raid in Abbottabad, the screenwriter/director team behind The Hurt Locker were in the middle of developing a film about the US’ post-September 11th failure to apprehend Bin Laden in the Tora Bora caves. Understandably, the successful killing of Bin Laden demolished their project overnight.

After a period of adjustment, the pair broadened the planned film’s scope to encompass the entire decade-long search for the terrorist, with Boal granted extensive and unprecedented access to classified CIA intelligence about the mission. While the extent of Boal’s access raised early concerns that the film would be a hagiographical depiction of the organisation, in retrospect the film’s proximity to both to events and the people behind them has produced a film of unexpected power, arising as a deliberate result of its dispassionate, journalistic approach. 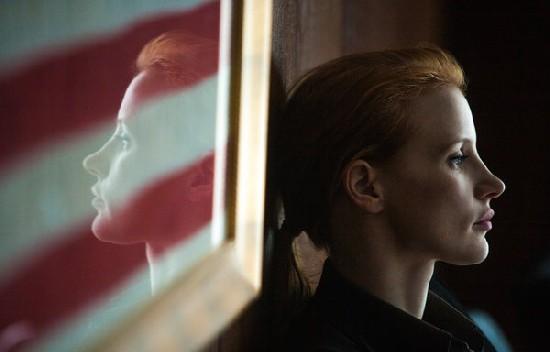 The decade following the September 11th attacks has seen countless depictions of counter-terrorism both historical and contemporary, mining a rich vein of suspense, paranoia and murky ethics. Zero Dark Thirty‘s accuracy is a key part of its marketing strategy, selling itself as the true, untold story of the clandestine hunt for Osama Bin Laden. Partially a consequence of being released in the same year, Zero Dark Thirty invites direct comparison with Argo, Ben Affleck’s retelling of the 1979 Iran Hostage Crisis. While Argo is also based on a true story, the filmmakers heighten the drama through the addition of fictional events, culminating in an airport chase which never actually happened. The story is still fundamentally true, but has been embellished to be more thrilling and emotionally satisfying.

There’s nothing atypical or necessarily wrong about this approach, of course, but Argo makes a deliberate attempt to vouch for its own authenticity, concluding with a sequence displaying images of the film’s actors alongside photographs of their real-life counter-parts: logic suggesting that if the characters look so much like the real people then surely the story must be equally accurate. Boal and Bigelow didn’t have this option. Where Argo is a period piece, Zero Dark Thirty takes place over the last few years, and while the “Canadian Caper” Argo depicts was international news, the level of its profile was nothing compared to the search for Bin Laden. Any attempt to sex up the film would have caused massive controversy in a story already brimming with difficult moral choices, from torture to the occupation of entire countries.

Zero Dark Thirty is fortunate historically in that it has an action-packed third act already built in − SEAL Team Six’s raid on Bin Laden’s compound − but even so, the film consistently eschews action in favour of confusion and malaise. Continuing the approach they employed in The Hurt Locker, Bigelow and Boal demonstrate a conviction that process is as interesting as action – believing that their story is exciting enough without artificial roadblocks and emotional enough without complicated back-stories or character motivations. Focusing primarily on fledgling CIA agent Maya (Jessica Chastain), the film demonstrates an admirable disregard for the sympathetic crutches usually given to main characters. The audience isn’t given any details about Maya beyond what’s relevant to the story: she doesn’t have any relationships, family members, friends, or even a surname. The most we see of her private life is a few moments of her sitting on her sofa at the end of a long day, exhausted. While this emphasises her single-mindedness and dedication to her task, it’s also emblematic of the film’s detached manner and the conscious decision to avoid artificiality, or appear to at least.

The film’s impassive journalistic tone is equally striking in its representation of how the mission was conducted. Boal’s script strives to not make political points, offering images without commenting directly upon them. This is most evident in the now-notorious scenes of torture, a CIA strategy which is shown to be appropriately horrifying and one that produces unreliable results. Considering its prominence in the CIA’s pre-Abu Ghraib intelligence-gathering procedures, its absence would be conspicuous: the torture of detainees is a part of the story, and so it’s a part of the film (but not the only part, despite a score of opinion pieces from those wishing to use the film to rehash old battles.)

Without the benefit of hindsight that the audience possesses, Maya spends most of the film stumbling around in search of her quarry, pursuing dead ends, leads gone cold, and men who may or may not be alive. Anything less than this would be unfaithful to the reality of the task, but it’s also a brilliant narrative device. By making frustrated stagnation occupy the bulk of the narrative and largely withholding its action until the end, Zero Dark Thirty ensures that its climax is immensely satisfying. Excluding the raid’s target and the lengthy, extraordinary circumstances which led to it happening, the operation itself is fairly straightforward, and yet if the film had been littered with gunfights and ticking clock scenes then it wouldn’t be nearly as tense. Instead, the Abbottabad raid is one of the most gripping sequences of the year − a flash flood after two hours of drizzle.

Structuring the film in this way is as much of an attempt at audience manipulation as Argo‘s fictional additions, but it somehow feels more gratifying, more real. Boal and Bigelow manage to have things both ways: Zero Dark Thirty affects the appearance of a docudrama while smuggling in a familiar narrative. As a driven outsider, smothered by bureaucratic superiors and obsessed with vengeance as others lose interest, Maya’s journey is conventional, even though the mission’s historic nature and the avoidance of intimacy disguises this. Halfway through the film she even suffers a tragedy to make it personal, or as personal as a film like Zero Dark Thirty can manage.

While the focus on Maya downplays the contributions of countless others, her value to the task can’t be overstated; as she puts it so memorably, she’s “the motherfucker who found this place”. Boal and Bigelow would argue – and have – that they were just lucky, discovering in the course of their research that the centre of their story was a steely, complex, resourceful woman (who is also allegedly the basis for Claire Danes’ character in Homeland). It’s fortunate for the audience as well: in large part due to Chastain’s terrific performance, Maya is as compelling as the film that surrounds her.