Warrick Brownlow-Pike is a famous television cactus. Before his current job as the puppeteer for CBBC’s Dodge the Dog, Warrick spent three years performing Oucho, a banana-loving, water-hating cactus who spoke his own language called Cactinian. “My interview for that was in a pub. We were sat there with our drinks and they said, ‘We’ve got this character: it’s a cactus. It can’t pick anything up, it can’t walk around because it’s in a pot, and it doesn’t speak any English.’ Where do you go from there? I didn’t know, so I just started gibbering on like a madman, going, ‘Aw, di di di, aw, losoli!’ ”

Oucho’s unique language developed a following. “After doing it a few times kids started picking it up and deciphering it, realising that losoli meant lovely and Flicky Herman was David Beckham and anananadi! meant banana. But then once you’ve said it on children’s TV you can’t change it the next day, because otherwise kids would write in. We had to keep a dictionary in the end. It got crazy.” Alongside human co-host Ed Petrie, the pair presented live continuity links and had two programmes of their own. “We did a lot in a short space of time, so I suppose we burned ourselves out. I remember asking myself a question and going ‘Di, di.’ ‘No! You don’t speak Cactinian on your own!’ ” 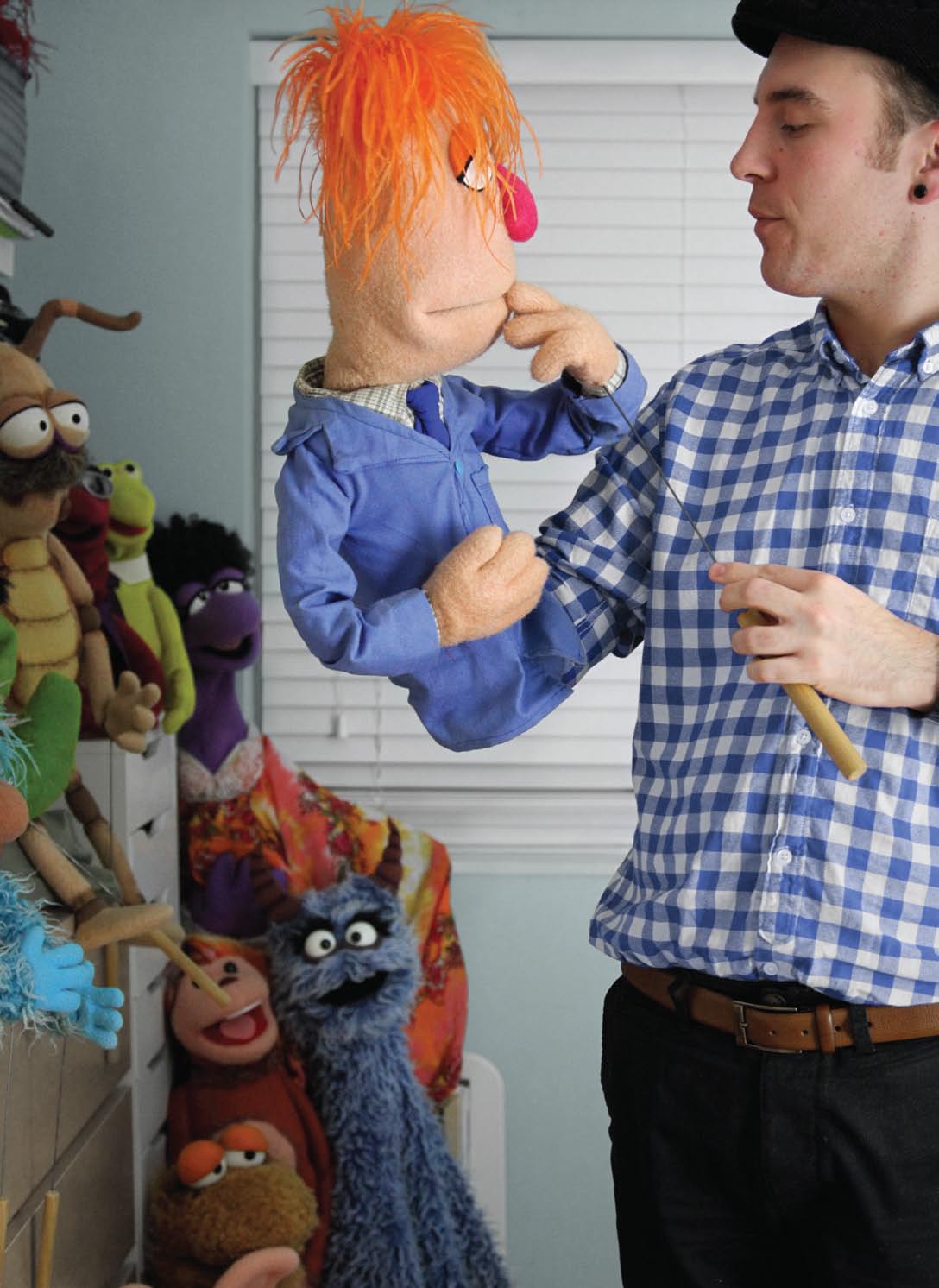 If you’re under the age of 12, it’s likely that you’re familiar with Warrick’s work. One of Britain’s most prolific puppeteers, he has worked for everyone from Cbeebies to The Jim Henson Company (assisting with the Muppets when they come to the U.K.) If his face was on television as much as his characters, he’d be famous. For Warrick, anonymity is part of the appeal: “That’s the brilliant thing about puppets. You get to do all these things and nobody knows who you are. You don’t want to be famous; you want the characters to be. It’s the best of both worlds because you can go shopping and not be noticed, but then you put the puppet on and everyone goes, ‘Oh, it’s you! Come in! Have cake!’”

While still only 27 years-old, it’s easy to see how Warrick has risen to the top of his field so quickly. It’s difficult to recall ever meeting anyone so singularly passionate. “It’s all I’ve ever wanted to do. It’s my only thing, you know? It was never an option that there would be anything else. I just wanted to do puppets, and had blind faith that it was going to happen. I didn’t go to college or university because there are no puppets in college or university.” As if to prove his point, every inch of Warrick’s workshop is covered with puppets, designs for puppets, and books on puppetry. “When I was young, I never consciously had to think ‘Oh, I must put in some time today’. When I was doing other things I wanted to go back to doing it. Anything else was a chore.” As he talks, Warrick still can’t help himself, picking up puppets again and again to demonstrate his points. Even when he’s not holding one, Warrick uses his gift for mimicry to leap into the voices of the people he’s talking about, from co-workers to the Queen (whom he once performed privately for).

Warrick was just two years old when he found his calling: “It sounds bizarre, but it’s true. I was sat in front of a repeat of the Muppet Show. The curtains opened and all the Muppets came out, singing and dancing to the music, and I was in heaven. In that moment I thought, ‘I don’t know what this is, but it’s what I need to do.’ I just knew.” As Warrick’s passion developed his mother supported him, winning competitions so he could go to the premieres of Muppet movies to meet the performers. “Maybe you wouldn’t be too happy if your kid said, ‘Oh, I’m going to play with puppets for the rest of my life’ But she never did.” Instead of discouraging him, Warrick’s mother instead used her “genius for sewing and making things” to help him make his first puppets. “We watched lots of programmes and tried to figure out the shape of things. We learned where the seams would go and how to do the hands. I had these big books with photographs of Muppets in them. I’d try and work out what someone was doing and realise that they were just leaning against the wall.”

The pair finished their first puppet when Warrick was 7. He points it out, sitting alongside other efforts. While his early puppets are clearly inspired by their Muppet forebears (his second one is essentially a yellow Kermit), they’re still impressive, with or without parental guidance. Now Warrick uses professional puppet-builders who realise his intricate designs for him. “If I do myself it takes me about a week, which is why I don’t very often.” Even sourcing materials is time-consuming: “You can’t go to one place. You have to get foam from somewhere, fur from somewhere else, fleece from another place, eyes made out of whatever you can find to make eyes out of…”

Working primarily for CBBC, Warrick now finds himself in a strange position where the performers he idolised as a child are his peers. “Ed the Duck was our boss. She’s gone from performing that character to being in charge of the whole department.” Puppetry is a small world, but an open one; Warrick’s met almost everyone in the industry at least twice; once as an awestruck child and again as a peer. On his first job (performing the hands of pop song-singing rats for a show called Space Pirates) he found himself working alongside the original performer of Otis the Aardvark, who had once called him as a child to offer encouragement. His heroes never seem more than a heartfelt letter away: during a chat about full-body puppet costumes, Warrick mentions that he once wrote to Carol Spinney, the man who has performed Big Bird for 43 years. Later he brings out Carol’s reply: the letter, written on paper the colour of a large avian, features a drawing of Big Bird hugging a puppet which Warrick designed himself. The spirit of the Muppets is an open-hearted one, and it’s been clearly absorbed by Warrick. It’s easy to imagine him writing the same sort of letter to a young fan.

In a world where children’s entertainment is increasingly computer-generated, puppets are endearingly old-fashioned. Even at the heights of the industry, puppets are still made of felt and string and foam. Whenever Warrick picks up one of his beautifully-designed puppets, it’s hard not to notice their stands – homemade devices which are basically teacup holders with the prongs removed and half a tennis ball stuck on top. “That’s what I love about puppets,” Warrick explains. “This little thing is just balls and fluff, but you can make a connection with it, between the puppet and the person.”

Puppeteering is an extreme form of method acting, in its own quiet way. When Warrick’s under the CBBC desk performing, it’s as if he stops existing. “The crew will say, “Dodge can you step left, Dodge can you step right, Dodge do you want a cup of tea?” People just talk to the puppet and I talk to them through it. I stop being me and go into a weird state. I love to see him live there, in that world, and to see the relationships he can have with people.”

“I remember the first time I met Kermit the Frog,” Warrick says, instantly giddy. “It was only a few years ago. He smiled and I started blushing. ‘Oh my God, Kermit’s smiling at me! What do I say to him?’ Then I thought to myself, ‘Oh don’t be stupid, it’s just a puppet.’ But it wasn’t. It was Kermit. That’s me as an adult, flustered by the fact that a puppet was smiling at me, and I’m surrounded by them every day. Even knowing how it all works, I can still watch the Muppets and love it, because I believe them. I believe that they’re real.”

Despite it becoming his profession, Warrick is still just as enthusiastic about puppeteering. “It’s a dream. If I wasn’t there being paid for this I’d be at home doing the same just to please myself. Today, yesterday and tomorrow, I’m still doing exactly what I did when I was six, except now there’s a TV camera and thousands of children are seeing it. It was only my Mum before, but it’s just the same, really.”