A pig is strolling along a beach in Tynemouth, thinking about the dead. Still weary after his lengthy flight from Japan, he decides to rest on a nearby bench for a moment. It’s here that he’s accosted by the ghost of the late author Robert Westall, who has taken the guise of a terrier. The pair discuss literature, aeroplanes and World War II, and before they go their separate ways they head to a nearby pub for a drink; they’re in Newcastle, after all. The visitor’s name is Hayao Miyazaki, and when he not assuming porcine form he’s considered Japan’s greatest living filmmaker, beloved for co-founding Studio Ghibli as well as writing and directing many of its finest pictures, from My Neighbour Totoro to Spirited Away. For most, turning into a pig would be noteworthy, but Miyazaki has made a career out of extraordinary acts of transmogrification: in Ponyo, the eponymous goldfish starts to become human after eating an errant piece of ham, while the fighter pilot protagonist of Porco Rosso is changed into “The Crimson Pig” by a curse, and the Boar God Okkoto-Nushi in Princess Mononoke becomes a demon after a corrupting gunshot wound.

Miyazaki’s encounter with Westall takes place in his short manga, A Trip to Tynemouth. It is one of many such efforts in which the animator appears in his printed comics – known as manga, as opposed to the animated medium, anime – as a moustachioed swine with bottlecap spectacles, reflecting upon the influences and obsessions that have shaped his work.

Like an aging prizefighter, Miyazaki has had a tendency to erroneously retire from his chosen profession. Indefatigably hard working – he has typically drawn or redrawn by hand thousands of frames on each of his films – his assorted retirements have usually been greeted with a reasonable degree of scepticism. Recently, however, he announced that the forthcoming historical epic, The Wind Rises, would be his last film. At the age of 73 it’s probably wise to finally take him at his word. As his cinematic career draws to a close, then, it is worth contemplating, as Miyazaki himself often has through manga, not just his body of work, but how he became the filmmaker that created it.

With Studio Ghibli’s output widely admired and the tree-growing narcoleptic Totoro a burgeoning global icon, it can be easy to forget that the company’s cultural eminence is a relatively new development: not only did Miyazaki not form Studio Ghibli until 22 years into his professional life, but several years passed subsequently before any of the studio’s films were actually seen in the west, outside of the illicit, battered videotapes that circulated amongst communities of anime enthusiasts. Even today, when Studio Ghibli’s films are dubbed by Hollywood actors and aggressively distributed internationally by Disney, being a western admirer of Miyazaki means that one is still exposed only to a small segment of his work: his superlative Studio Ghibli films represent merely the part of the iceberg that we’re able to see.

What’s missing from our understanding is the underberg, comprising Miyazaki’s mangas and early television serials that have largely evaded English-language release. Momentarily putting aside their own merits as ragged, vibrant works of art in themselves, it is possible to trace the beginnings of ideas, motifs and characters that found fuller expression in his films. A panel in a 1969 manga anticipates an identical image that occurs a decade later in his theatrical debut, while a story Miyazaki struggled with in 1980 about a boy-turned-giant-mountain-lion was reconfigured into the very different historical fantasy Princess Mononoke seventeen years later. 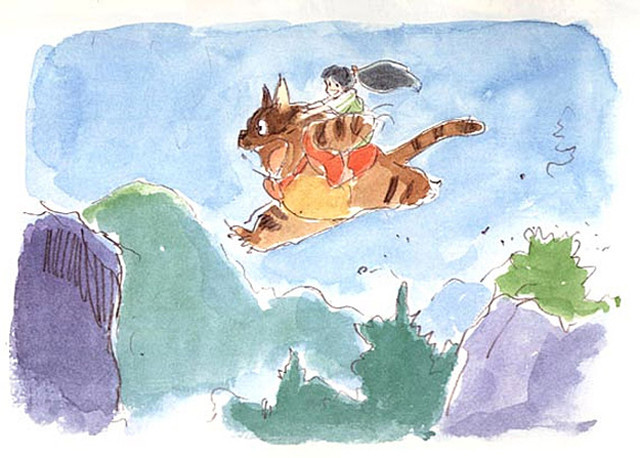 It shouldn’t be expected that mangas like Air Meal (a comic rumination on the history of in-flight food) or For My Sister (a graphic poem about a boy taking his terminally ill twin sister on a flight around the world) will provide a Rosetta Stone to fully understanding Miyazaki any more than his cinematic efforts do. Like any complicated, prolific artist, his artistic identity is multi-faceted; a fact illustrated by the Japanese critical reaction to The Wind Rises. An embellished biopic of Jiro Horikoshi, chief engineer of the notorious A6M “Zero” fighters in World War II, Miyazaki was criticised by both the country’s left and right for his nuanced and contradictory portrayal of his protagonist as a brilliant, sensitive man whose exceptional talents nevertheless contributed to widespread destruction.

Miyazaki’s non-film work rebuffs reductive suppositions. Instead, it shows how despite his enduring interest in supernatural elements, Japanese folk tales and British children’s literature, everything he creates is deeply personal, regardless of scale or content. Daydream Data Notes, for instance, is a collection of illustrated essays on pre-WWII military vehicles contributed to the hobby magazine, Model Graphix. Miyazaki had grown up during World War II, when his father’s manufacturing company was producing rudders for Japanese fighter planes. The essays demonstrate how his childhood obsession with sketching such vehicles developed into the persistent reoccurrence of similar aircraft throughout his films. A thoughtful pacifist, his early passion for aircraft was counteracted by witnessing their devastating potential during the firebombing of Utsunomiya. From this perspective, the tension in his films between wonder and horror at what technology can do becomes more comprehensible.

The unique and specific combination of Miyazaki’s creative obsessions and personal history conspire to render his progressive values – feminism, environmentalism, pacifism – in ways that are visually exciting, original and moving. Miyazaki’s storytelling instincts, honed by the thousands upon thousands of images he has personally drawn in his lifetime, have always tended towards depicting complex ideas through vivid imagery – hence his early discovery that supernatural metamorphosis was an elegant way to portray on the outside what’s happening on the inside. While his narrative reliance on forms of transmutation can be partially attributed to its place within Japanese literary tradition, the process exists as a useful visual metaphor for man’s ruinous treatment of the environment, a theme he has been exploring for decades.

For all of the marauding demons, wood spirits and dust creatures that find their way into Miyazaki’s films, the key to their lasting appeal is the humanism imbued in them by their creator. Where most of America’s animated feature films, for example, are created in industrial parks in Southern California, Miyazaki has maintained a genuine connection with nature, spending much of his time in a remote mountain cabin. His emphasis on the importance of the natural world stands in stark contrast even to Pixar at their peak—a company whose films, perhaps by virtue of their use of computer animation as much as their environment can’t help but be relentlessly modern, even as they eschew the lazy pop culture references of their peers. While Studio Ghibli have also incorporated the use of computer animation into their filmmaking, their work is still mostly produced using traditional cel animation. Even if the paint is digital, their features are still largely drawn by artists, one image at a time. This increasingly anachronistic approach finds an affinity with the films themselves, which allow for moments of stillness and beauty largely absent from comparable animated films emerging from other studios.

Studio Ghibli’s reputation has been built almost entirely on the creative brilliance of two men: Miyazaki and Isao Takahata – the studio’s other co-founder and director of Grave of the Fireflies, Pom Poko and Only Yesterday. While the studio has released appealing films from other directors, increasingly so as Miyazaki and Takahata have slowed their work-rate, their imminent departure can’t fail to have an effect on its fortunes. Based on the principles instilled by Miyazaki, Studio Ghibli will doubtlessly endure, and continue to produce excellent work. Even so, the unavoidable fact remains that a significant era in the history of animation is ending.

In searching for an appropriate way to consider Miyazaki’s departure, it is perhaps best to look to the man himself. As a developing artist, he made a conscious decision to eschew the influence of seminal manga artist Osamu Tezuka in favour of developing his own style. Writing in his memoir Starting Point, he recalls: “When I was finally forced to admit that my drawings actually did look like Tezuka’s, I took out the sketches I had stored in the drawer of our dresser and burned them all. I burned them and resolved to start over from scratch.”

Miyazaki would inevitably be the first to argue that his retirement should herald the arrival of something new, rather than inspiring pale imitations of his own work. His career breakthrough came when he and Isao Takahata co-directed fourteen episodes of a popular television series about the master thief and scoundrel Lupin III. But after achieving enormous success with Lupin III on film and television, Miyazaki decided to leave him behind to pursue fresh ground. In his memoir, he bids farewell to the character, whose time had come: “I often think of Lupin fondly, for he was hungry in those days; he was a bit lecherous, fastidious, scattered, and headstrong, and he was crazy about mini-car races.”