Dissatisfaction has lingered around the adaptation of The Hobbit seemingly from the moment director Peter Jackson announced his plan to divide J.R.R. Tolkien’s relatively slim children’s book into three separate features. Even during the excellent second instalment The Desolation Of Smaugit was difficult to escape the idea that the trilogy was somehow inessential. For all of its merits – most of which involve Martin Freeman’s performance as the titular halfling Bilbo Baggins – The Hobbit has always felt more like a retread of The Lord Of The Rings than a singular, vital work in its own right.

Now that we’re at the end – truly, definitively, finally at the end – it becomes reasonable to ask: what was the point of it all? Why does The Hobbit exist? These aren’t meant to be hostile questions. It’s generally unfair to demand the motivation for artistic endeavours, but some reflection in this instance might help to understand how best to comprehend the three films. What was Jackson trying to accomplish, and did he succeed on those terms?

Here’s one possible explanation. At the close of that other long trilogy directed by Jackson and set in Middle Earth, Frodo Baggins (Elijah Wood) sits in the back of a wagon with his forgetful, rapidly-ageing uncle Bilbo (Ian Holm in this incarnation). Their adventures are over. “Frodo, any chance of seeing that old ring of mine again, the one I gave you?” Bilbo asks. His nephew apologises and says he lost it. A compassionate lie. Bilbo declares this a pity: “I should like to have held it one last time.” 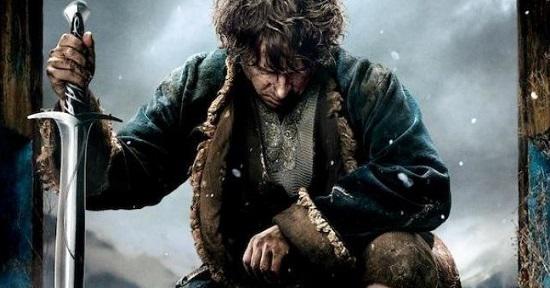 If there’s a sentiment in either of the two trilogies that can best illuminate The Hobbit‘s genesis, perhaps it’s this one. While it’s possible that the director and his collaborators had things to say about Middle Earth that they hadn’t managed to during the 683-minute running time of The Lord of the Rings, the overwhelming impression is simply that they wanted to live those 683 minutes over again.

The biggest danger that follows massive success is the loss of artistic constraints, and this is to some degree responsible for Jackson’s tendency to bloat material whether it’s required or not. Who’s going to tell the person who made The Lord Of The Rings that it’s a bad idea to make a film as big as possible when that approach has worked so well for him before? The consequence of no limitations is that Jackson was less interested in what made the source novel unique than how it could be shaped into something else. Accordingly the structure of the three films is derived not from the book but the trilogy that was made before it, with characters, sequences and storylines added to inflate the narrative into an epic, and the focus broadened from one hobbit to a vast ensemble.

The decision to expand the cast is particularly troublesome in The Battle Of The Five Armies, the concluding chapter of the series. Martin Freeman, ostensibly the protagonist, is reduced to being the fourth or fifth main character. Endless time is spent instead on the travails of Bard the Bowman (Luke Evans), Thorin Oakenshield (Richard Armitage) and sulking elf Legolas (Orlando Bloom), who pointlessly hunts a secondary antagonist virtually identical to the main one. Even the tiresome servant Alfrid (Ryan Gage) gets more screen time, spending a portion of the film in ludicrous drag as if someone had told him they were remaking Monty Python’s Life Of Brian.

Bilbo has almost nothing to do in his own story: he calms a few people down, frets a little, and sneaks out of the Lonely Mountain a couple of times. That’s pretty much it. While this is in some respects due to the novel, in which the hobbit is unconscious for most of the battle, it is a shame considering how eager Jackson and his co-writers were to embellish the story elsewhere. If they could invent a baffling elf-dwarf-elf love triangle for Legolas, then surely they could have given Bilbo something other to do than repeatedly offer to head home and get out of everybody’s way. As with the previous two instalments, The Battle Of The Five Armies is wonderful whenever Freeman is around and a bit of a slog when he’s not.

If one were to be generous, it could be argued that Jackson made the films he thought audiences wanted to see. This would be understandable: after all, the first trilogy is one of the most beloved and commercially successful cinematic enterprises of all time. Unfortunately, the choice to dwell so readily on earlier successes both in its structure and inclusion of returning characters robs The Hobbit of any identity of its own. In all non-chronological respects it is a sequel to The Lord Of The Rings, and consequently suffers from the same problem that besets most sequels: by attempting to provide more of the same, it offers less.

Given that the three films were shot at the same time, the collapse in quality in its final chapter is unexpected and bitterly disappointing. The trouble is that The Battle Of The Five Armies finds the story at a juncture where almost all of the book’s good material has already been depicted. Focusing on just the final 47 or so pages, Jackson is left to kill time however best he can, scrambling around to the point where some extras apparently seem to have their own storylines. Inevitably, one day a person with an admirable disregard for copyright law will re-edit The Hobbit into the two films it was originally intended to be, and both of them will be terrific.

Without Gollum, Smaug, talking spiders or daring barrel-based escapes to distract, the trilogy’s issues become ever more apparent. Somehow the film looks more fake than the ones that were made over a decade before: special effects have been a cornerstone of Jackson’s Middle Earth efforts since Fellowship of the Ring, but they have overtaken the film-making to the extent where unless a character is shown in close-up it’s a good bet that it’s not actually them. It is essentially an animated film: where previous outings utilised New Zealand’s natural beauty, The Battle Of The Five Armies could have been made in any studio that owned enough green screen. None of this is helped by the story being restricted almost entirely to a single uninspiring location that has the grey-and-brown colour scheme of a shabby industrial park.

Despite all of these problems the film is generally successful in its opening half, exploring themes of greed, subjugation, malice and spite, and effectively building up to the climactic battle as several characters become driven by competing material desires. The depiction of Thorin is especially effective, as the dwarf leader succumbs to “dragon sickness” and builds literal and emotional walls around his party. Devoted to protecting the birthright that’s shredding his mind, he declares: “Life is cheap, but a treasure is worth all the blood we can spend.”

Throughout the first half, Jackson and his co-writers make beautiful and simple points about the true value of wealth and the importance of more meaningful priorities: unlike a world-threatening ring, the Arkenstone, emeralds of Girion, and Smaug’s gold are ultimately devoid of any power beyond the evil they inspire people to do, and thus they are inherently useless. In the film’s most moving scene, Bilbo describes his plans for an acorn he’s been carrying around, and it makes one ache to think of all the time wasted on endless, miserable battle scenes rather than this wise, duplicitous, funny, stout-hearted, ornery, strange little hobbit. Alas, Jackson ploughs on, and on: CG dwarves and CG elves and CG men fighting CG orcs and CG wargs and CG trolls, everyone toppling over constantly like a tub of army men being played with by a careless, rambunctious child, and none of it meaning a thing.