Horror, at its most potent, gives form and dimension to our deepest fears. The creature in the dark. The haunted house. The unstoppable figure with a knife. This is the reason that corruption of the body is such a common theme in the horror genre and elsewhere; we fear decay, disease and change. Given that it’s Halloween, and that this week’s new release Horns (2014) opens with its Daniel Radcliffe-shaped protagonist growing horns out of the top of his head, we decided to reflect on some of the most disturbing instances of bodily transmutation on film. 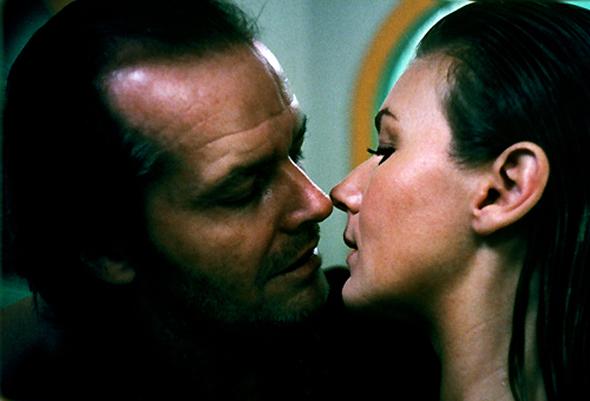 In one of The Shining’s most notorious scenes, Jack Torrance (Jack Nicholson) enters the Overlook Hotel’s psychically-agitated Room 237 and finds a beautiful naked woman waiting for him in a bathtub. They start kissing, only for her to change into an old lady covered with sores, simultaneously lying dead in the water and lurching towards him while laughing manically. While the woman’s presence is explained in Stephen King’s original novel, the moment’s power, like the rest of Stanley Kubrick’s film, is derived from its ambiguity and openness to interpretation. Regardless of what the scene actually represents, however, what unsettles isn’t the old woman herself, but the congealment of the erotic into the horrific. THE TRANSFORMATION: Man to werewolf

It would be possible to populate this list entirely with lycanthropic transformations. Excruciating and thrilling in equal measure, such scenes are an essential component of any self-respecting werewolf movie. After the sort of deliberation accorded to the choice of a new pope, we landed on Joe Dante’sThe Howling. Released the same year as An American Werewolf in London (1981), genre partisans have debated ever since about which film has the better transformation sequence. While John Landis’ effort arguably wins, something about The Howling disconcerts on a deeper level: it’s the way Robert Picardo’s skin pulsates, an interminable throb that augurs the monster hatching violently into life. THE TRANSFORMATION: Man to iron man

Over the course of your lifetime you will see hundreds of films. Sometimes it can be hard to distinguish between them all, a problem that Tetsuo: The Iron Man will never have. After all, it’s the one where a man’s penis changes into a power drill. After running over a “metal fetishist” and dumping the body, an unnamed salaryman (Tomorowo Taguchi) starts finding shards of metal in his flesh, beginning a strange metamorphosis into the film’s titular Iron Man. Woozy, traumatic and completely silly, Tetsuo: The Iron Man seems exclusively designed to be stumbled across on television at some small hour of the night, strung-out by insomnia and unsure of whether you really saw it at all. ANJELICA HUSTON IN THE WITCHES (1990)

THE TRANSFORMATION: Woman to witch

The bright whimsy of Quentin Blake’s illustrations sometimes obscures the nastiness that festers within Roald Dahl’s books, where children are frequently tortured and disfigured by maleficent adults. Nicolas Roeg’s adaptation of The Witches demonstrates that the ideal cinematic translator of Dahl’s writing is not a master of neatness like Wes Anderson but rather the lurid film maker behind Don’t Look Now(1973): the grotesque scene wherein Angelica Huston pulls off her face before a crowd of bald, toeless witches is surely burned into the mind of anyone who was unfortunate, and lucky, enough to see the film as a child. 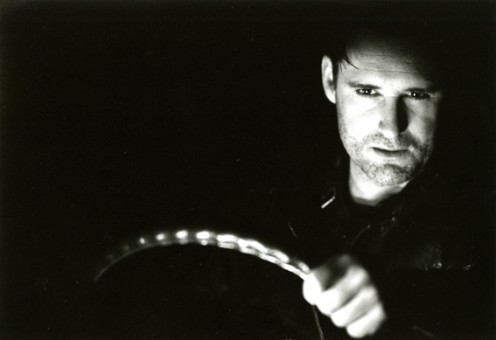 In The Verve’s “Bitter Sweet Symphony”, Britpop frontman and lank hair enthusiast Richard Ashcroft claimed he was “a million different people from one day to the next”. The reality of the idea is terrifying: you’d never be able to find your keys, for one thing. Ashcroft may have rethought his stance if he’d watched David Lynch’s nightmarish gem Lost Highway, released a few months earlier. In the film, jazz saxophonist Fred Madison (Bill Pullman) is arrested for the murder of his wife, only to transform in his prison cell into a young car mechanic played by Balthazar Getty. The fact that the actual change takes place off-screen only increases the sense of existential dread. THE TRANSFORMATION: Man to alien

At the beginning of Neill Blomkamp’s District 9, the populace of Johannesburg are unwilling to empathise with the crustacean-like aliens stranded in their city, penning them in a shanty town where they are treated as second-class citizens and live off cat food. Circumstances progress when bureaucrat Wikus (Sharlto Copley) is exposed to an alien cannister, instigating his steady conversion into a “prawn”. What’s troublesome isn’t Wikus’ physical change but how it incites those around him into acting even less humanely than before. An equally accurate description of the transformation in District 9 would be ‘FILM TO VIVID APARTHEID ALLEGORY’. 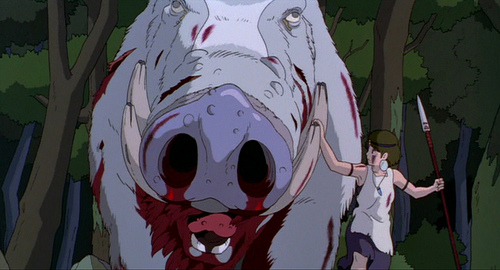 THE CHARACTER OKKOTO-NUSHI IN PRINCESS MONONOKE (1997)

THE TRANSFORMATION: Boar god to demon

Almost all of Hayao Miyazaki’s films feature instances of transmogrification, where parents turn into pigs, goldfish turn into boys, and fighter pilots turn into pig fighter pilots. Of all such shifts, however, there are few in his canon as alarming as the one that drives the conclusion of Princess Mononoke. Driven mad by a gunshot wound, the blind boar god Okkotto-nushi changes into a demon, his body consumed by tendrils of blood. Miyazaki may be most famous for creating the sleepy forest spirit Totoro, but Princess Mononoke demonstrates his gift for the abominable. 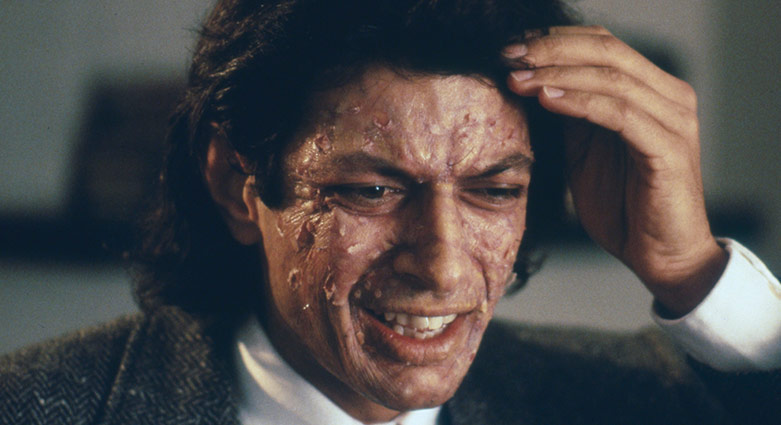 THE TRANSFORMATION: Man to fly

David Cronenberg is associated with body horror like Edgar Wright is associated with whip pans or M. Night Shyamalan is associated with squandering early promise. The most enduring of the film-maker’s studies of human decay and mutation remains The Fly, which follows the slow, putrescent metamorphosis of scientist Seth Brundle (Jeff Goldblum) into the perversely grotesque ‘Brundlefly.’ The film’s excellence is as much a result of its casting as the nauseating special effects, with the gangly-yet-weirdly-attractive Goldblum perfect as a Dr. Frankenstein who makes a monster out of himself. Powerful, tragic and brimming with meaning, 28-years later The Fly has lost none of its capacity to move and repulse.

THE TRANSFORMATION: Man to thing

One of the key reasons John Carpenter’s remake of The Thing from Another World (1951) is so successful that it understands the uncomfortable vagueness of the word “thing”. A named antagonist has properties and capabilities that can be understood, if not easily overcome. The shape-shifting creature in The Thing, on the other hand, can be anything, or anyone. The terror it inspires comes not from any specific form but its unknowability. The lifeform’s most gruesome outing occurs as the research station’s doctor applies a defibrillator to Norris (Charles Hallahan). The patient’s chest subsequently changes into a mouth and bites the doctor’s arms off, before going through a hideous transformation into a spider-like severed head. After such bizarre and disquieting events, the only rational response is the film’s most famous line: “You’ve got to be fucking kidding.” THE TRANSFORMATION: Woman to hallucinated swan

Darren Aronofsky’s heightened style of film-making has perhaps never found a more appropriate home than Black Swan, in which a vulnerable ballerina succumbs to madness and hallucinations as she chases artistic perfection. It’s difficult to pinpoint specific moments that startle by themselves, although scenes of Nina (Natalie Portman) pulling thick swan hairs from her skin and her legs bending backwards have their own grisly merits. Instead, it is Aronofsky’s intense delirium that unbalances the viewer, as Nina is overcome by feathery rashes, blood-filled eyes and voices that cry from mirrors, as she is transformed at a price into the role she’s desperate to perform.