Roy Williams sits at his kitchen table, quietly ferocious. In front of him lies a neat black notebook which he is filling up with a new play, crowded with writing that looks distinctly like shorthand until you examine it closely. Quick to offer a handshake and a cup of tea, it would be difficult to tell from his cosy kitchen and polite, thoughtful demeanour that he has written some of the most emotionally devastating plays of the past few decades.

One of our finest playwrights, Roy’s work offers clear-eyed, occasionally brutal assessments of race, class, identity and aspiration in modern Britain. His writing, while fundamentally hopeful, is nonetheless acutely aware of the many contradictions and corruptions that make up society. Roy has created close to a play a year since his 1996 debut The ‘No Boys’ Cricket Club, which may have something to do with his fearsome work ethic. Today, Roy has been writing since six in the morning, as he does every day, and yet is still alert and bright. “I’ve always been an early riser. I don’t know. It suits my character. You wake up and you’re feeling fresh and alive: you want to get your thoughts out of your head and on to a piece of paper. I like going to bed with a problem and waking up with a solution.”

Williams was raised in Notting Hill, and remains a staunch supporter of QPR football team. “I grew up in an area where football was a common thing you could talk about with your mates. It just sort of stayed with me, really. I love it. It’s a vibrant, passionate game.” His relationship with football reveals something of his approach to theatre. “A good game of football can be like a great night of theatre—it can be exhilarating and exciting and unpredictable. Last night’s game proved that: Arsenal lost three nil in the first leg and needed to score four in the second leg. People said it was impossible, but they came one goal from succeeding,” he says, recalling the team’s sensational exit from the Champions League the day before, despite trouncing AC Milan three-nil in their final match.

He continues, “No one could have predicted that, and that’s what you want from a good play. You want something that’s going to make you experience all of the emotions that human beings have in the course of two hours. It’s something that has stakes.”

>While Roy still continues to be in love with the theatre, he has become increasingly involved with film and television. He adapted his Olivierwinning play Fallout for television a few years ago, and has co-written the upcoming Fast Girls with Noel Clarke and Jay Basu, about a group of teenage girl athletes. “It’s a challenge. It’s such a different medium. In theatre you’re dependent on dialogue, but TV and film can do so much for you with the camera and editing. Those tools can tell the same story, so there’s not such a need for the characters to be talking. I’m relearning it all: how can I tell the story through the way the characters look at each other or act rather than what they’re saying.” Even so, theatre provides a perfect medium for his talents. “I think, for me, it’s still the best. It’s alive.” 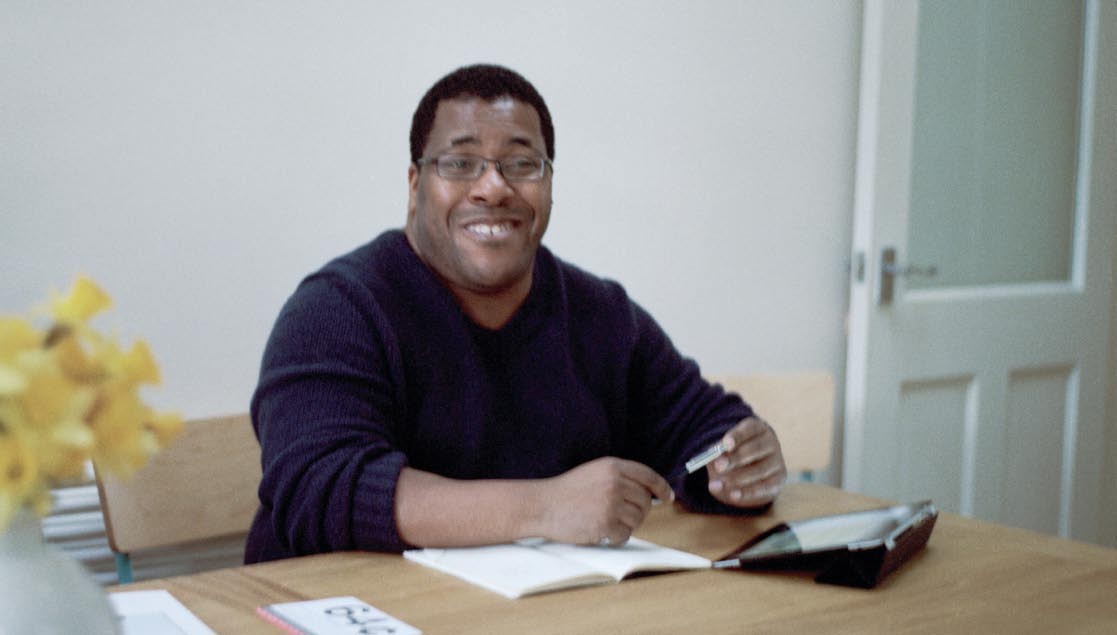 After sixteen solid years of work, Roy is still writing as much as ever, his output slowed only by the long programming schedules for theatres and the glacial pace of producing film and television. “I don’t think I’m as prolific as I was. My time has been taken up. But I think it’s okay because you can write a play and disappear for two years and come back and deliver another piece. Playwrights come and go anyway. It’s not like actors, where you follow their career and go, ‘That last one wasn’t as good as his others, I think he’s going out of fashion’. We don’t have that star quality. I’m glad we don’t. You’ve just got to ignore all that stuff and keep plugging away.”

Drawn into theatre by playwrights like Barrie Keefe who wrote characters that sounded like him, Roy’s plays are likewise populated with characters, often young, poor and troubled, who speak like regular people, colloquially and in short sentences. The naturalism of their interactions is key to making you believe in them: you’ve met his characters before in your own life, which makes the sudden spirals into tragedy or violence so much more affecting.

As a result, there’s a disparity between the people the plays are about and the people who are seeing them. “I think audiences—let’s be honest here—are attended predominantly by white, middle-class people. And if I go to the Royal Court or the National, those are the faces I see. I’m not complaining about that, that’s just the way it is.”

This might be a shame considering how Roy first fell in love with theatre, that the people who might be similarly affected by his work don’t see it, but he’s philosophical about it. “My plays are about certain people, but they are for everybody. Ultimately, I’m writing for theatre, for a theatre-going audience. I honestly don’t care if the audience is black or white. Would I like to see more black faces? Of course I would, but not everybody likes theatre. They’ve got to have an interest first.” This might be a reason why television has started to increasingly appeal to Roy. “I suppose the real difference is that film and television are seen by a lot more people. I’ve had stuff on TV and in one night more people will see it than will see six weeks of a play I’ve had on at a theatre.”

The cups of tea finished, Roy has to get back to work. There’s a notebook that needs filling. He reflects on how he is able to keep it still interesting for himself, sixteen plays later: “You need to keep writing about what makes you laugh, what makes you pissed off. What makes you pissed off may be in complete contrast to what pissed you off ten years before, so you write about that—about that difference. You write about what matters to you now. So those are questions I’m always throwing at myself. I’m just trying to keep my wits about me.”