By some distance, the best album cover of Bruce Springsteen’s long recording career is the one for his 1982 LP Nebraska. A stark black-and-white photograph taken from the window of a pick-up truck, the image depicts a flat, charnel landscape, divided only by a road that may as well be heading nowhere. As well as being a strong cover in itself, the photograph complements the spare acoustic recordings within–songs dealing with aimlessness and hardship amidst diminished expectations. It’s easy to imagine that if hadn’t already been used by Springsteen, the shot would have been ideal for the poster of Alexander Payne’s latest film, also called Nebraska. Taking place in large part on the endless roads evoked by that image, the film follows aged, ornery recovering alcoholic Woody Grant (Bruce Dern) as he attempts to claim a million dollar prize promised in a piece of spurious junk mail. First seen lumbering along a stretch of highway trying to walk from Montana to Lincoln, Nebraska, Woody’s mind has flown off the thread, cast into a perpetual fug. After repeated unsuccessful interventions, his son David (Will Forte)–the definition of long-suffering – agrees to drive Woody to Nebraska himself.

Payne’s greatest strength as a filmmaker is the way he creates empathy for his characters not in spite of their flaws, but because of them. Finding the grace in banal lives, he retains a fundamental compassion for his characters, understanding their circumstances even as he casts a clear-eyed gaze upon their personal failings. His protagonists, all layered studies in dissatisfaction, are met with warmth as well as arched eyebrows. This humanist approach is present throughout Nebraska: Woody, who on some level is aware that he hasn’t really won any money, is burrowing desperately into his own confusion to claim some meaning for his uninspiring life and failures as a father. He remains irascible and difficult, but his profound disappointment is both recognisable and deeply sympathetic. Woody’s knotty depiction has its roots in Bob Nelson’s understated script as well as Bruce Dern’s nuanced, enormously moving performance. While Nebraska is littered with comedic moments, as well as a memorable turn from Stacy Keach as Woody’s old business partner, it’s the relationship between Woody and his son that forms the film’s emotional core. David, whose life is so indistinct that his girlfriend can’t even tell if they’re in a relationship, concedes readily to the futile task of transporting Woody not out of familial duty but to grasp a few days of distraction from an otherwise dreary existence. It’s refreshing to see Forte in such a weighty role, and his performance, all slumped shoulders and quiet exasperation, suggests a man felled by life yet unable to forsake his patient, Midwestern politeness.

As Payne carefully tends to the protagonists of his films, it’s not unusual to see smaller parts rendered with less complexity, employing minor characters entirely for narrative reasons or for the sake of a laugh. This fate befalls the extended Grant family that Woody and David– joined briefly by Woody’s wife Kate (June Squibb) and David’s local newsman brother Ross (Bob Odenkirk) – visit on their way to Lincoln. Unleavened by the empathy afforded to Woody and David, they’re portrayed with a superciliousness that hews towards the cruel.

David’s cousins suffer the harshest treatment, their conversational interests limited to how long it takes to drive specific distances. Once they come to believe that Woody is rich, the pair are depicted as spectacularly dim-witted and money-grubbing: if the film was animated then at some point dollar signs would surely appear in their eyes, accompanied by the ringing of cash registers. As in Payne’s previous film The Descendants, the vulgar avarice of distant family members is used as a way to unite the core family unit and remind them of their values. However, the consequence of this narrative decision is that a quartet of flawed, endearing humans are surrounded by problematic caricatures. 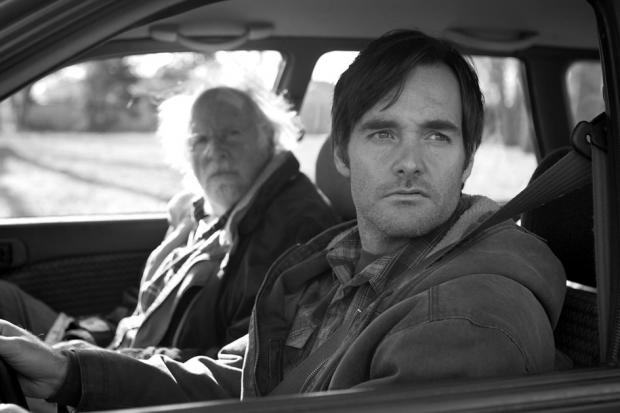 That the film espouses the same distrust of extended family as Payne’s last effort raises questions about the momentum of his work. As enjoyable as Nebraska is, there’s nothing in it that he hasn’t attempted before. As ever, Payne excels at creating a sense of place by identifying the mundane, swapping the suburban sprawls of Hawaii for the patio furniture and small talk of the Great Plains. With dissatisfaction as his key theme, he returns again and again to sad sack individuals in denial about their unhappiness. Woody, it could be argued, is just a slightly older version of Jack Nicholson’s character in About Schmidt, albeit one with a drinking problem and a cataract mind. Like Sideways and About Schmidt, his frustrations are brought to the surface via a meandering road trip–if you were to broaden the idea of a trip to include general long journeys, then the list of Payne’s films that use this strategy would also include The Descendants and Payne’s beautiful short 14e arrondissement, made for the uneven portmanteau film Paris, je t’aime.

Everything that Payne can do well as a filmmaker he does well here, but for someone who isn’t especially prolific his reliance on the same few tropes has the potential to make even well-constructed work feel like a retread. It isn’t Nebraska’s fault that it’s Payne’s sixth film rather than his debut, of course, but the endeavour is a little less impressive when held up against its overly-similar peers. It’s arguable whether or not this familiarity is a problem. If a film is excellent–and Nebraska certainly is–does it matter if its creator has made it a few times already? Repetition can produce diminishing returns, but using the same motifs and techniques in different circumstances can also cast a new perspective on pet themes. Ultimately, perhaps, it depends upon the path you hope an artist’s career will follow: whether you want them to grow from each creative experience and venture towards uncertain new directions, or to keep doing the things they do best.

Considering Payne’s cool-yet-ultimately-sympathetic approach towards his characters, perhaps a similar way to look upon Nebraska would be to conclude that it isn’t derivative of his earlier films, but is instead a distillation of them. After the relatively exotic climes of Sideways and The Descendants, Payne returns to the state where his first three features were set and where he grew up. In doing so, he strips his work down to its elemental form: discarding not only the picturesque backdrops which softened his previous two films but the use of colour as well, all he has left to work with are those flat landscapes and endless roads that may as well lead nowhere. It’s from this desolate starting point that he can wholly focus on his enduring interest: unhappy people, trying to find a way to make their lives feel meaningful.