Among other creative pursuits, Mike Mills has worked successfully as an artist, music video director, film-maker and album cover designer, but the key raw materials have always been essentially the same: his own life. With conscious effort Mike’s work is sculpted out of the clay of his memories: his second feature, Beginners, dealt with the experience of his father coming out at the age of 75, while his latest, 20th Century Women, is a tribute to his mother, as played by Annette Bening in a career-best performance. It doesn’t take long in Mike’s company to realise that the film – soulful, searching and tender – shares its best qualities with its director. 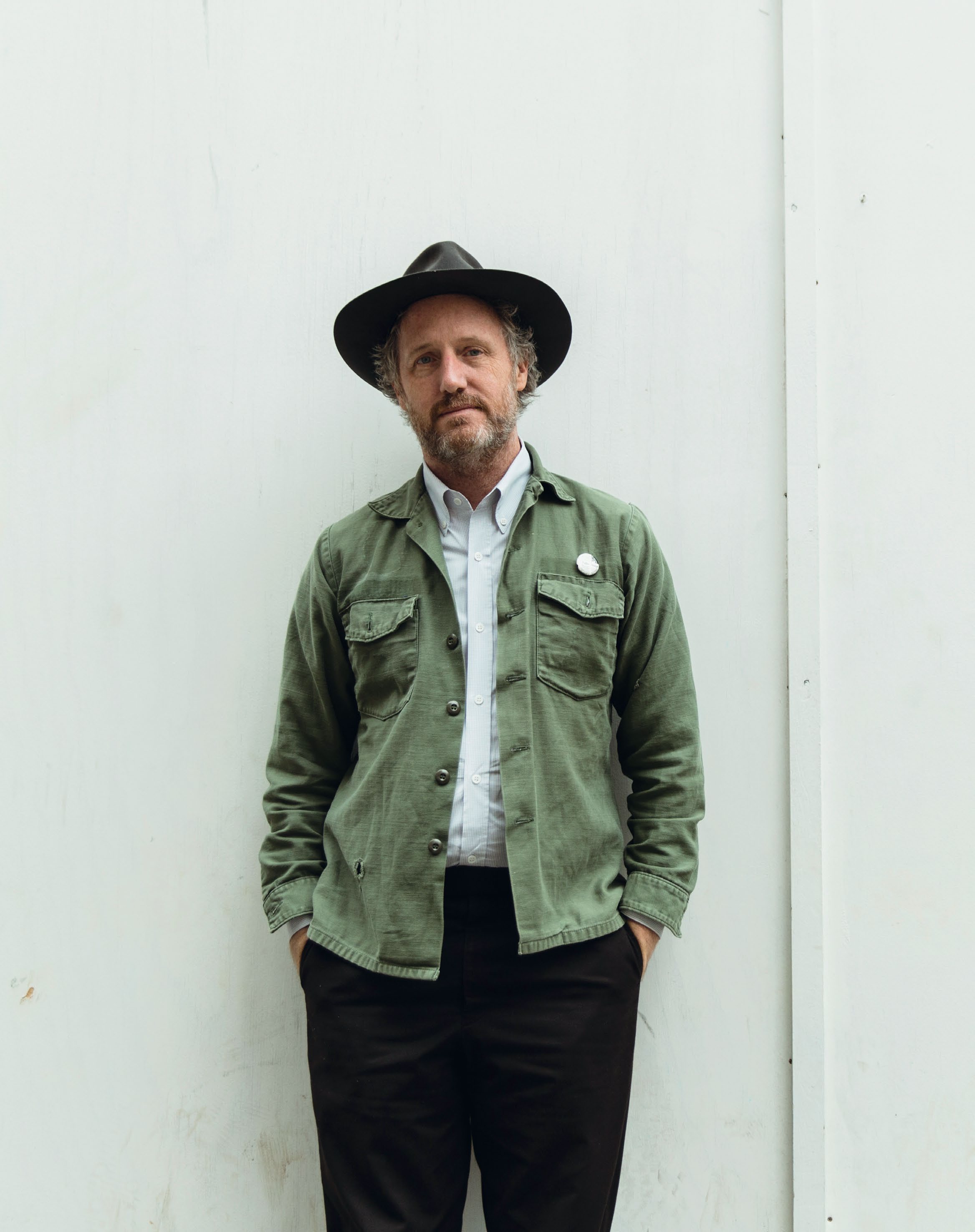 20th Century Women is a portrait of three women in 1979, but it’s also about the roles they play in the development of a teenage boy. Why that framing story?

That was my real life. Dorothea is based on my mother, Abbie is based on my sister, and Julie is an amalgamation of first girlfriends. I was raised by a very strong, out-of-time mom. It was weird to have a Depression-era parent in the 1970s in America. She didn’t look or act like anyone else, and she was a proto-feminist in her own way – she wanted to be a pilot in World War II. Amelia Earhart/Humphrey Bogart was my mother, and then my sister was this punk and artist, trying to figure out her life, and I was the kind of kid who had girls who were friends, not lovers, and they would tell me about their troubles. I was very much brought up in a matriarchy. My dad was around but I never talked to him about anything, he wasn’t present. I do hope the film has a feminism in it but obviously it’s the perspective of a heterosexual, cis-gendered male. It’s from the outside. For example, I was lost in how to speak Julie’s voice, so I interviewed women who were that age at that time. Julie’s first period is one of my friend’s first period and her first sexual experience is another friend’s. I tried to have real women’s voices interject into my writing.

What you’re describing is an adaptation of memory. So there’s who your mother actually was, and then your perception of her, and then your memory of that perception years later, and then there’s a screenplay based on that memory, and then an actress performs the character you’ve written, bringing her own thoughts and experiences. How much of Dorothea remains your mother?

It’s a thing I’m still figuring out. That sounds like a cute answer but it’s true. There are so many details in the film that are absolutely real: my mother was a draftsperson at the Container Corporation of America, the wood rabbit you see from Watership Down is the wood rabbit she carved, Annette Bening is wearing my mom’s actual jewellery, she’s laying on my mom’s actual bedspread, on the walls are the actual paintings I grew up with. The film’s very enchanted with my real childhood, but any portrait of a person is a construct, your version of them, and people are way too paradoxical and non-fixed to ever be captured accurately in a film. You can salvage parts, little views of them, but people aren’t films. Even if I’d made a documentary with her there in the room, my mom was 78 years and films are 110 minutes. It’s impossible to get right, but there’s something bolstering and worthwhile about making your best attempt at this thing that’s inevitably going to fail. It’s concreteizing your effort to understand a person. That was the essence of the project.

Did you struggle to understand your parents when they were alive? They’re clearly both fascinating people, but in both this film and Beginners you depict a wall between you.

That’s probably what made me do both movies. I feel that wall very much. It’s my main complaint: I didn’t get to know either of them as much as I wanted to. I don’t know if you know any people born in the 1920s, but they’re a different species. They don’t talk about their interior lives. I grew up in Santa Barbara in the 1970s, which was a very therapised, talking-about-everything atmosphere. I just wanted more. With this movie I struggled a lot because I’m interwoven with my mom. I love her but I don’t know her. Everything clicked for me only when I realised, oh, that is the film. I could put in that yearning to understand, those glimpses of understanding. Moments of grace, of connection, but ultimately, as I say in the movie, maybe that was as close as it ever got. I was always trying to have a 1970s-tinged conversation about our feelings and what I perceived to be her depression, although I wouldn’t have used that word back then. Her loneliness or whatever it was. She would really bristle at that. She didn’t want to be analysed in that way.

If your mother was resistant to analysis, how would she feel now you’ve made a film about her?

She’s pissed! I was definitely conflicted over that. My dad was a grand creature, especially when he came out. He was a super ambassadorial showboat and would have loved to have a film made about him. He would have loved a film made about an older gay man, too – he really felt alone in that, and non-represented. So that was easy; my mom was a much trickier beast. I tried to do things with her while she was alive and she always resisted. When she got angry it’d scare me and I’d stop. Even though she’s just a ghost now in my head, at times I could sense her anger. It confused me about my intentions, but I finally reached a conclusion: obviously this is filled with so much love for her. It’s an attempt to understand her. I felt, well, come on mom, it’s obvious that I’m loving you here. Deal with it. Also, I’m sorry, but you’ve been dead for a long time. She died in 1999 and I was 33. I was 46 when I started working on the film. I get to do this.

Having made two films about your relationship with your parents, do you feel that in some sense you’ve laid that part of your life to rest?

Is it done? It’d be really weird to make other movies about my parents, but one could. Wes Anderson is just making movies about a boy’s strange relationship with his father over and over again. Supposedly that’s what everyone does. I do like working from memory and things you’ve observed, real events which are remembered events. They’re very untidy for what dramaturgy wants, and for that reason I love them. When people connect to this movie they’re connecting in a different way because it smells real. I like the process, so maybe I can do it with other people. I don’t know if American cinema needs more movies about white people though. Here’s the other contradictory answer: I could make either movie again and show another side of my parents. I don’t want to, but I could. It would be a trip to see how different I could make it and have it still be true. I attended art school and that’s often how artists work their careers. One theme is good for 50 years. Historical context always affects your characters – even this film’s title suggests that a 20th century woman is going to be different from one raised this century. How particular do you feel these women are to that period?

It’s funny because I’ve heard Elle Fanning say that she didn’t think of Julie as a woman from the past. She was reminded of her own friends, so maybe some things don’t change. I’m really interested by people in time, how we are shaped by the moment we are in and how cultural context makes certain narratives of ourselves. Being born in 1966, the 20th century always meant the latest, the greatest, so I called it 20th Century Women because I found it bittersweet and poignant that the 20th century is now the past. The name had a funerary, elegiac quality which surprised me. I think the fact of one’s ageing, one’s future and society’s future always surprises.

Is the idyllic portrayal of 1970s California nostalgia for your own youth or do you feel there was something different about that era?

Well it’s true to that time and place. Santa Barbara is incredibly sun-dappled. It’s not like I honeyed it up, the actual place is honeyed. I find predigital life honeyed also. It was a nicer time, I have to say. I’ve become a luddite. I didn’t try to make that statement, but my characters are all trying to love and understand each other, and there’s something barbiturate-like about that. It makes warm feelings. It’s like some scotch. I suffer from chronic mild depression and if I made a Michael Haneke film I’d just shoot myself. I need to make movies that remind me of positivity. Hopefully I do it without becoming kitsch or sentimental.

There’s something fundamentally romantic about your depiction of human connection. Why do you think that is?

As a sort of lonely, slightly depressed person, film-making gives me this opportunity to practice another side of myself where I reach out with the excuse of a camera and the job. I am very hungry for love and connection and that weirdly gets imbued in everything I make. Sometimes I find it too gentle, but that’s just my personality. I have a four-year-old boy now and he’s that way too. I realised I was just like him. When I see those qualities in him I think they’re really nice, so maybe I’m being hard on myself. I try to show heartbreak, and things that don’t work, but it’s in an overall context that’s humane. I’m distinctly lacking malevolence.

The film is filled with incidents but in terms of narrative not a huge amount happens. What do you prefer about that approach?

Plot just doesn’t do it for me. There’s the idea of people addressing external obstacles and it reveals their character, right? That’s scriptwriting formula, but I don’t believe it. It doesn’t respond to me. It doesn’t turn on my creativity to think in stories. My wife (fellow film-maker Miranda July) can think of a novel in one minute. Her scripts come to her as whole stories. I’m more interested in a meditation on identity, how we think about who we are and how that’s done in relation to others. That’s the stuff I like. In America I’m getting slightly dinged for it. People will say “great performances but not much story”. Well, yeah! I intended that. Isn’t that the high road?