Of the 109 minutes that make up Michel Gondry’s sublime Eternal Sunshine of the Spotless Mind, it’s these final 29 seconds that form its most curious part, recasting a seemingly optimistic ending as something decidedly more ambiguous. What’s additionally intriguing is that this slim, easily-overlooked sequence doesn’t actually appear in Ouroboros-aficionado Charlie Kaufman’s Oscar-winning screenplay. In a career marked by the use of elastic, dreamlike imagery and practical in-camera effects, it stands quietly as one of Michel’s most inventive moments: a canny visual metaphor for characters stuck in the same patterns of behaviour, doomed to repeat themselves with or without the aid of memory-erasing technology. 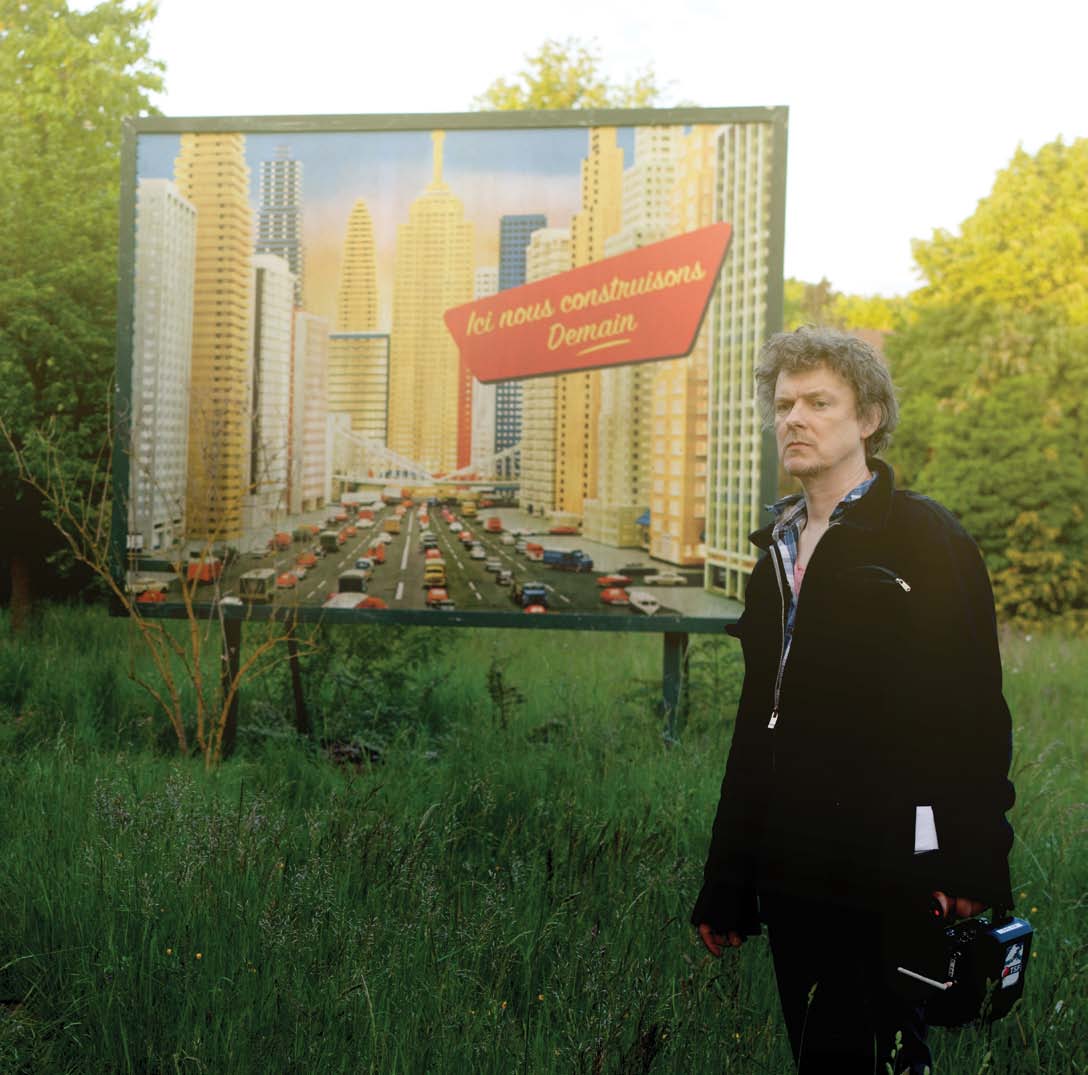 A first viewing of his latest film Mood Indigo suggests that Michel is stuck in a loop of his own. Based on Boris Vian’s 1947 novel L’Écume des Jours (Froth on the Daydream), it depicts a romance between quixotic Colin (Romain Duris) and unflappable Chloé (Audrey Tautou). On its surface— frequently the most compelling and pleasurable area of his work—the film bears an unmistakeable resemblance to Michel’s previous output: a dance sequence where the characters’ elongated limbs cavort wildly could have come from one of his many ground-breaking music videos, while a vehicular cloud that Chloé and Colin ride on their first date wouldn’t be out of place in his earlier feature The Science of Sleep. In aesthetic terms at least, the director is repeating himself. A game of Michel Gondry Visual Whimsy Bingo would be over by the end of the first act, somewhere around the time that Colin chases a pair of disobedient shoes around his apartment, heckled by a tiny man dressed as a rodent.

Considering the infectious energy of his work, one might expect Michel to be similarly excitable. In person, however, he is thoughtful and reflective, given to disarming bouts of emotional honesty. He remains surprisingly boyish even at fifty—a documentary about him featured on his first released collection of music videos was aptly titled I’ve Been Twelve Forever—but his disposition is that of a man who thinks carefully about what he makes. He acknowledges Mood Indigo’s aesthetic repetition but is keen to clarify the reasoning behind it. “I thought I had to bring something that was part of my visual world,” he says. “Boris Vian’s kind of surrealism really influenced my music videos, so I thought it made sense to use the same elements to recreate a story by him. It seemed only fair.”

He points to the film’s epigraph, a quote from Vian himself: “This story is completely true, for I imagined it from beginning to end.” To stay faithful to the book, Michel explains, he needed to produce something with its own distinct reality, a recreation of the sensation of dreaming. “In a dream all sorts of things happen that are completely impossible but you still believe them. I think it’s something that happens in your mind so you can have rest and you don’t wake up. The logical part of your brain gets disconnected. It’s not really functioning. And that’s what I’m doing when I make this sort of world.”

In light of this, the decision to adapt L’Écume des Jours seems less like creative stagnancy and more like an earnest attempt to pay tribute to one of his key inspirations. Looking at Mood Indigo through the prism of Boris Vian, the filmmaker’s efforts appear less self-derivative: at one point Colin plays a pianocktail—a musical instrument that concocts beverages based on the tone of the song being performed—a charming detail that feels like it could have been created by Michel and yet is a straight import from the book. It prompts the question, though: considering that he had already directed two decades’ worth of feature films, music videos and commercials influenced by Vian, what could he gain by going directly to the source? “It’s a book that every adolescent reads in France, and it’s a sort of life-changing experience,” Michel answers. “You believe that literature has to be something quite academic or proper, and suddenly you find this writer that speaks to you, no matter when you’re from. My son was born in 1991 and he loves the book too. It feels like every generation discovers this thing and it has the same liberating impact on them.”

The appeal of producing an adaptation, he argues, was not the aesthetic overlap, but rather the idea that his unique approach could bring the story’s emotional core to life. “It depends on your tastes. Sometimes people would feel it’s too much. I feel all that was part of the story. It’s a way for the two main characters to express the love they have for one another.” While Mood Indigo is reminiscent of his other efforts in that most of its budget seems to have gone on wool, cardboard and pipe cleaners, in its finer moments Michel uses the fanciful, lo-fi art direction to pinpoint the emotional state of his characters. The apogee of Colin and Chloé’s relationship finds the couple floating giddily through a chapel as if underwater, while later the colour drains steadily from the screen as the narrative veers towards despair. On these occasions, much like the repetition during Eternal Sunshine of the Spotless Mind’s dying seconds, he finds a poetical, cinematic way to articulate the eddies and tides of the heart.

In a monologue at the beginning of Is the Man Who Is Tall Happy?, his 2013 documentary that combined a feature-length Noam Chomsky interview with hand-drawn animation, Michel described that project as a way to focus his “often shattered creativity.” I wonder if he finds focus a struggle, given the way his ideas teem in many directions at once. While his gift for mise-en-scène is undeniable, the director admits that it can be difficult to reconcile his penchant for bold visual ideas—which find an ideal home in heightened, three-minute music videos—and the demands of a longer narrative. “It’s a struggle in the sense that I’m not sure what’s better for a movie, if it needs to be very narrow in the way it’s shot, or if you can go for a wider ranger of styles and elements and still keep the concentration on the main characters,” he says. “I like movies that explore and that go off in unpredictable directions.” When drawn on the subject, he confesses his uncertainty. “It’s something I wonder. I never know if I’m doing the right thing or not. Sometimes I think it would be better if I forget everything that I know how to do, to just shoot two people speaking. But I’m trying both.”

Michel mentions The We and the I, a terrific, largely unsung film that grew out of an after-school workshop he ran in the Bronx. Starring a group of young non-professional actors playing versions of themselves, the film followed the teenagers on a bus ride home from school. “There were no special effects, no tricks. It was just kids on a bus and their relationships, about how they start off shallow and mean but become deeper and more philosophical as the group becomes smaller.”

He makes the valid point that even if his current film shares its creative DNA with earlier projects, he has been increasingly experimental in recent years. “I think I try different things. I’ve done documentaries like Dave Chappelle’s Block Party, and the one with Noam Chomsky. The main thing that’s important about being a filmmaker is that you always have another project. I started making features thirteen years ago and I’ve made ten movies. I feel very lucky because I keep trying things that are new.”

As Michel has searched for subjects to interest him, he has homed in on projects whose narrower releases allow more emotional freedom. “When I do a movie that is smaller in budget I have less responsibility to be commercial and reach out to a bigger audience,” he says. “I can really express deep feelings, and those feelings are not necessarily shared by so many people.” While he’s made efforts to take his work in new directions, particularly through documentary, in his fiction work he finds himself returning to the same emotional territory again and again. This often takes the form of a profound romantic neuroticism, where a male protagonist frets over disenfranchising a woman to the extent that his worry sometimes ends up doing that very thing. There’s a conspicuous number of emotionally insecure leading men in his films, and they’re almost as much of a hallmark as the elaborate single takes or the portmanteau inventions.

Michel confesses that the trend deliberately reflects his own experiences. In life, as in his films, he appears preoccupied by the subject. “You go too far into your attachment with somebody that it’s nearly pathological and becomes scary. It’s like when you’re in a big relationship and the person leaves and you feel an extraordinary sense of love and missing; I feel that before the relationship even starts, and sometimes it makes the person go away. It’s something I’m trying to get control over but have never been able to, so I talk about it in my movies.”

His estimable forces of whimsy mean his work is occasionally dismissed as confection, but for all of their frivolity Michel’s films are honest about human behaviour in its most awkward, ill-advised forms, even when those forms are inspired by his own life. While he admits to being unsure about whether being so personal is the best strategy for a filmmaker, he says it’s given him perspective on his past actions. “I’m trying to use my brain more to make the right moves when I want to be involved with somebody, but it’s stronger when it comes from the heart or the guts. So my movies make me feel I’m really stupid to react like I do. I’m trying to change because I can see it even more clearly, but I’m not sure I’m really succeeding.” No matter how many of his films touch on the issue, though, Michel can’t help himself. “The emotion has stayed the same all my life. I’m fifty and it doesn’t change a bit. It has been exactly the same problem: you meet somebody you like, you’re in love, you’re really excited and you think your life will be changed forever. And then you start over again.”