Larus Marinus. Pollachius Virens. Cleona Celata. Alongside the fishermen who appear in Lucien Castaing-Taylor and Véréna Paravel’s documentary Leviathan, the film’s credits list the binomials of every species featured on screen: the fish the men catch, the crabs that end up in their nets, the gulls that swarm their boat. This concession to the importance of non-human life only hints at the complexity of Leviathan’s perspective.

A dialogue-free, sensorially overwhelming portrait of an 80-ft fishing trawler, the film depicts the experience of being at sea from ever-changing viewpoints. Utilising miniature cameras attached to fishermen, lowered below the water or even sluicing amidst piles of dying fish, Leviathan freely switches its point of view between humans, machinery and animals, creating a fragmentary representation of the sea, equally beautiful and horrific.

Members of the pioneering Sensory Ethnography Lab at Harvard University (where they both lecture), Lucien and Véréna are intense, deeply meditative individuals, genuinely attempting to do something new. Ahead of Leviathan’s release, the pair sat down to discuss their inability to discuss the film.

You created the film to be open to interpretation, but do you have your own reading of it? And does that reading matter?

Lucien Castaing-Taylor: We’re human beings so we’re constantly interpreting. The problem is that most of the time when we’re interpreting ourselves and our actions and other people, trying to give some meaning to life, we’re doing it in a very inconclusive way.

An interpretation that we come to now would be different from one we come to in six months’ time. Interpretations mutate as we go through life and have different experiences, so the moment a filmmaker assigns one to a film it constrains the aesthetic potentialities that the film can put into play.

For me it’s not to give our own interpretation, nor is it even to give lots of interpretations and allow people to choose between them. We’re not stopping that – its open-endedness is part of it, something people can respond to. But the film itself exists before interpretation intervenes. Our purpose was to give people a very potent aesthetic experience, to give them a glimpse into a reality that they haven’t had first-hand–a protracted, painful, difficult, visceral, profound embodied experience. If you were attempting to create an experience rather than make something didactic, then how did you put the film together? How did you decide which shot followed which, for example?

LCT: I’d say it’s both easier and harder to try to simply give shape, to give form to an amorphous mass of aesthetic experience. The idea of making a documentary that provides an interpretation of the world is a very peculiar notion if you think about it. It’s very odd if documentaries are claiming to have some privileged purchase on reality, on lived experience. Our desire was simply to give an experience of an experience.

Véréna Paravel: We were trying to come up with general, big concepts about humanity and having metaphysical discussions, but it was also a question of going back to the visceral feelings that we had.

LCT: It was dictated by the material. We had these debates but they ended up being less significant in the editing. The material transcended us and worked through us. I think it worked through us in ways we still haven’t come to terms with.

VP: And this is the problem. Every time we talk about the film we’re trying to make sense of it through our prose, but then when I’m at all these screenings, watching the first 20 minutes to check the sound, what I’m seeing has nothing to do with all the bullshit that comes out of our mouths. We’re trying desperately to put some words to it and we’re attached to this thing, but every time I’m sitting there I think this is absolutely bullshit. This film is way, way beyond our words. It sounds super pretentious to say that.

LCT: But it happens to be true. Is there anything that can be gained from discussing the film, then?

LCT: Yes, I think there’s every point in talking about it. There’s so much to discuss and debate because it’s not trying to encapsulate one particular point of view, whether ethnological, political or argumentative. You could run a poll of 200 people watching it and get radically divergent responses based upon their own intellectual convictions, their political orientations and above all their lived experience.

VP: The format can create really interesting questions. The range of discussion can be biblical; can be about the cosmos, about the scientific conversation, about literature, about painting, about the filmmaking process, about technology, about belief, about capitalism. At the same time, whenever we talk about it, somehow at the end I feel those discussions ended up diminishing the film, reducing it to just a tiny part of what it could be or what it is.

LCT: Reality has a magnitude that will always exceed our representations of it and our capacity to understand it. The challenge when you make a work of art is to do the same thing: to come up with an aesthetic object or experience that people will argue over constantly, irreducible to something that can be summarised in a single representation. You watch a documentary and you know what it’s saying, what its point of view is. To me that’s an abdication of aesthetic, intellectual and political responsibility, because it’s reducing the world to something that the filmmaker is pretending to be able to give you certain pronouncements about, to edify the audience. Even though you find yourselves unable to summarise the film now, what was its starting point?

LCT: I would say that we both know and don’t know. There are lots of different reasons, some of which we can remember, some of which we can’t remember. One of them was that we both have a childhood relationships to the sea that we were interested in revisiting. I didn’t know where it was going to take me, to do something that would be in dialogue with my experience of growing up with my father, who worked in shipping in Liverpool.

VP: We didn’t know what we were seeking, but we knew we wanted to find a new way of representing the sea. Not just the sea, but the idea of “the Deep”, and humanity’s relationship to it. We had a vague idea because you have imagery in your mind, but that was one of the challenges: to try to not reproduce any of that imagery that we knew, and find a fresh way of capturing the experience. 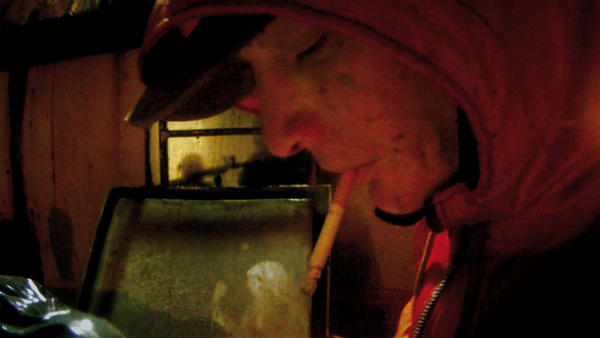 The film keeps shifting perspective. What were you hoping to accomplish through that technique? Were you trying to produce a holistic depiction of the sea?

LCT: All human cognition and consciousness consists of fragments–sensations, words, images, memories, sounds–jostling in different strands that come together into moments of clarity, or moments of meaning, and then they desegregate and come back together again. Films do that too because films are created by humans, who are sentient, meaning-making, moralising beings.

If you watch a film, it’s just these shards, these tiny fragments that are put there in a sequence–fragments of sounds and images that the viewer constructs a hypothetical universe out of. It’s a kind of domesticated totality, and in this film we’re just proceeding with these fragments but not trying to domesticate them into something that’s super-linear or something that could be expressed linguistically. Instead, it’s an 87-minute experience of being at sea, both metaphorically and literally.