Over three decades of a highly successful acting career Guy Pearce has avoided being typecast by enthusiastically pursuing an array of different roles, from bombastic drag queens to vengeful amnesiacs to self-righteous detectives. Ahead of the release of tense dystopian Australian drama The Rover, in which he plays a violent, taciturn ex-soldier opposite Robert Pattinson, we sat down with Guy to talk about his character in the film and his open-minded approach to career. 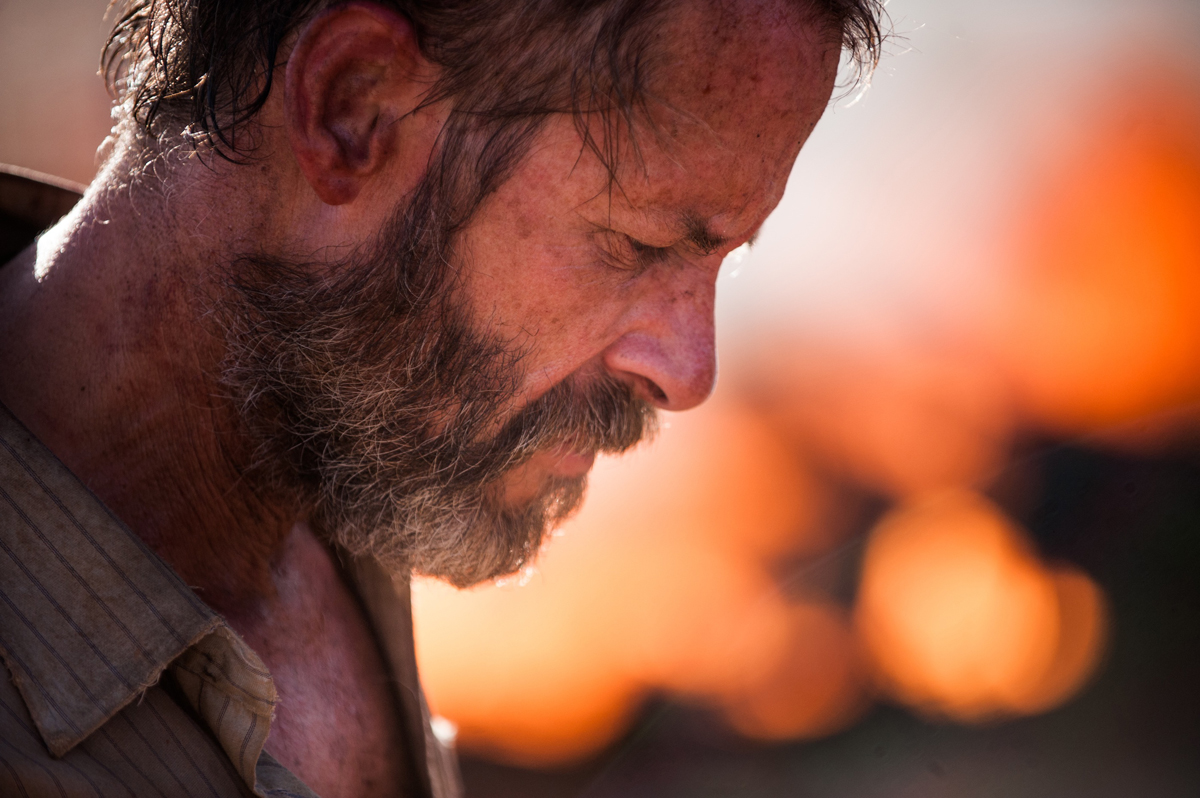 Was The Rover difficult to shoot? You spend a lot of it with flies all over your face.

I do! It wasn’t tough really. I love being in the Outback. It’s so fascinating and evocative and unusual. I get so much out of being there. Also we were making a very interesting movie. I think anything that is difficult, you either take it on or you try and forget about it. It felt like the flies and the heat just added to the experience and to the look of the film. It was probably tougher for Rob. It’s funny – every Aussie movie I do out in the desert there are always a couple of English actors going, “Fucking flies! My god!” Terrance Stamp or Ray Winstone or John Hurt or Rob Pattinson, all suffering.

Your character Eric doesn’t speak a great deal and there isn’t much detail given about his life. How did you approach playing him?

That was tricky in the beginning, and not because of the lack of dialogue. I really needed to understand who he used to be, where emotionally this character had gotten to by the time we meet him. I knew I was going to say yes to doing the film – I love David Michôd and his work, and was honoured to be asked to be the lead – but I nearly said no a few times. I couldn’t figure out who the guy was. So I forced David to ask some real questions about the character. I was trying to get a sense of the personality, because that’s what you play when you perform a character.

I remember talking to somebody on a job once and I said “I’m trying to understand the personality of this character”, and the guy said to me, “Well, he was very wealthy and he lost all his money and he had to steal…” But that wasn’t his personality, that was just what had happened to him. Is he nervous, is he anxious, is he confident? That’s the stuff that I’m interested in. That’s what you need to play a role. When we got close to shooting, David started to talk about the animal that Eric had become, this survivalist creature that he’d been stripped down to, and after that I felt like I was really able to get my claws into it. There are very violent moments in the film, but it isn’t like Eric snaps: that violence is an underlying presence, always there in him.

He’s beyond the point of snapping. He’s already snapped. I think he’s given up on himself. He’s just left everything behind of who he was morally and ethically. So it was an interesting character to play because you’re looking at a ghost of somebody.  It’s not until we start to see the subtle development of the relationship with Rob’s character that things start to bubble up to the surface again.

The film purposefully never fully articulates any of this, though, does it?

That’s right. It’s not very evident, and that’s why I went through that process with David to try and have these questions answered. But I feel as an audience member, what you haven’t been explicitly given in regards to motivation or plot or character development is all there in the tone. As long as there’s a logic behind it then it doesn’t need to all be explained. I think a lot of films go too far the other way. All the time they’re asking “Are you still with me? Are you still with me? Are you still with me?” Whereas what’s great about David is that he says “This is the story I’m telling and how I’m going to tell it. Keep up.” That’s a brave way for a film-maker to be.

It seems like you actively go for roles which are more complex, which often means characters who aren’t entirely sympathetic. What has been your thinking behind that?

I always just go for what’s interesting to me at the time. There’s no conscious decision about structuring it in any kind of way. You just take the best of what’s in front of you, and sometimes you might take something that you wouldn’t have a year ago, or ten years ago, depending on how you’re feeling about yourself and what you’re going through. I feel like I’m always changing. I always want to explore and open up to other things. The industry’s tough, though. It’s a tough machine to become part of and not feel like you’re being swept up in it. Standing your ground is tricky, but I’ve managed to do it, I think, much to the disappointment of my many agents. You’ve been a professional actor for almost 30 years. Do you feel like there’s anything that you haven’t done yet but want to?

Absolutely! There are seven billion people in the world. That’s a lot of stories to tell. A lot of different characters to play and a lot of exploring to be had. I really like to respond to what the universe is offering up. It’s important for me to be surprised and to respond really spontaneously to something. Even if I have questions and have to go through a process of talking to the director, that initial “Oooh!” has still got to be there. If it’s not then there’s no point in doing it because then I’ll be two months into a film wondering why I’m there.

I imagine that’s especially the case with bigger films, where you work on them for ages and then have to spend months doing promotion.

Yes, of course, and sometimes films lose their steam. You might jump on board something because it takes your fancy and then half way through you feel like it’s not being realised the way you wanted. And that’s okay. That’s just the way it is. As long as I’m reacting to what I understand to be the fire in me then that’s all that I can do, really. I know I give my best performances when I do that.

It took a while to understand that about myself because I got into a situation where suddenly there were all these opportunities and I felt I had to make hay while the sun shines, and one agent was telling my to do one film and then another agent was telling me to do another. I know that’s a first-world problem, but it was overwhelming. I think, though, that in order to follow a path and carve out some sort of longevity you’ve got to understand why you’re doing things and what it is you’re getting out of them, as well as when you’re doing your best and what your limitations are. Luckily I feel like I’ve done a pretty decent job of understanding that over the years. I may not have as big of a career as other people might have but I’m pretty happy. It works for me.