While Frank is ostensibly inspired by screenwriter Jon Ronson’s youthful experience of playing keyboards in the band of Frank Sidebottom (the comedy persona of the late Chris Sievey), the film eschews direct autobiography in order to explore ideas about outsider art, mental illness and ambition. Using the basic concept of a frontman who sports a papier-mâché head at all times, the film is an intense, weird, often very funny character study of two men: Frank (Michael Fassbender), an emotionally damaged yet brilliant musician who lives life “in the furthest corners”, and Jon (Domnhall Gleeson), whose crushing averageness makes him both attracted to and envious of his innately talented bandmate. Ahead of Frank’s release, we spoke to Domnhall about his work on the film and what it’s like acting opposite a papier-mâché head. 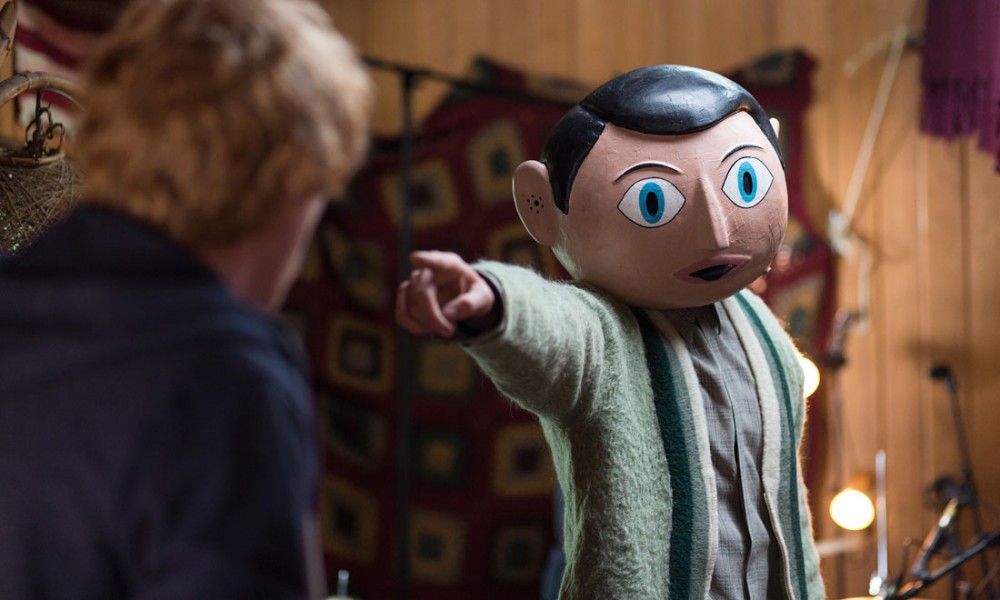 Jon is portrayed very sympathetically at the start of the film, but the depiction of him evolves throughout. Did that influence how you played him?

For me, when I read the script I had empathy with Jon until the end. I really delighted in him being a total dick sometimes. I always think that if somebody’s entertaining you’ll continue to want to watch them. Daniel Plainview in There Will Be Blood is a nightmare of a man, but there’s not a second you don’t want to watch him because his moral corruption is compelling. So I felt like as long as we could keep people laughing, and as long as Jon kept trying to do things with his life, then no matter how horrible those things were you would want to watch him. Being liked by the audience isn’t really here nor there.

He often makes the wrong decisions but you understand why.

Yeah, the others treat him horribly. And he’s not talented. At a certain point you just want to tell him “Look, you don’t have any talent!”, but he keeps trying. In a way, what else is he to do – just accept that he has no ability and give up? That’s not interesting. What you want to see is somebody struggle, and god help him he struggles hard.

How do you play mediocre?

You’ve got to be really careful how you phrase that question! It’s very easy. You make the character try as hard as he can and have what he does tell you that he’s not any good. The producers were really nice to give me songwriting credits for the terrible songs Jon sings at the start of the film, because I went in and made them up with the music guy. I knew they couldn’t be above a certain level and actually ended up revelling in how far I could push mediocre towards shit. Also, it helped that I’m not talented as a keyboardist: I learned keyboards specifically for this movie, so I was limited in that way too. My mediocrity was all there already, I just had to use it.

Your character is called Jon and the story is a fictionalised version of what happened when Jon Ronson joined Frank Sidebottom’s band. Did you bear the real Jon Ronson in mind at all?

Obviously there was the day when I considered if should I go down that route, but it was really clear that the film was inspired by the way Chris Sievey looked when he had the head on and by his spirit as opposed to his actual life or the songs he wrote. That’s why the film’s called Frank and why they have this character in the movie. You just leave everything else behind, I think. They wrote a character who isn’t anything like Jon Ronson, really, so I didn’t speak like him or behave like him. I just tried to do what would work for the script, and that was already difficult enough without throwing something else in on top of it.

It’s an obvious question to ask, but how difficult is it to act opposite someone when you can’t see their facial expressions? How did it affect your performance?

I guess that’s going to be the question, yes, and the problem is that the answer is probably slightly boring and unbelievable, which is that it didn’t feel weird except for when it was supposed to feel weird. The times when it’s supposed to feel strange in the film are when you really want to tell what Frank’s thinking and you just can’t because he chooses not to let you know. Michael was so expressive when he needed to be: he chose when to be exuberant or expressive and when not to be and in a way that’s the same as anybody else. We got into it really quickly, and he wore the head for quite a bit of the music rehearsals too so we got used to it before we arrived on set.

I’m guessing he wasn’t Method about it – he’d take the head off at the end of the day?

I think Michael is probably a bit mad but I don’t know if that was for the film or if that’s just him all the time. I guess I’ll find out the next time I meet him! I don’t know. But he took it off between takes, yeah. I just know that it was really fun because you don’t know what he’s going to do next, and I have a feeling that would be the case even if he wasn’t wearing a papier-mâché head.

What was the first thing that attracted you to the project?

Well, straight away when I read the script I thought it was really funny. I really like physical comedy and I hadn’t done much of it before on film. Mostly I liked the challenge of it. It’s one thing to write a story like this and another to actually put it in a film. How do you make all that madness into something which isn’t just a mess? I didn’t know how you do that, I really didn’t, but I felt if we managed it then it’d be the exact sort of film that I love, something strange and touching and big and odd.

It’s a film that’s unafraid of being weird, that doesn’t see weirdness as being a bad thing.

Yes, although I honestly don’t think that the film is trying to be weird; it’s just its sensibility. If you stay true to that sensibility it’ll become its own thing. It’ll have its own grammar, its own way of existing, and you’ll be able to have ridiculous sex in a hot tub or punch somebody full in the face or have some weird wrestling match, but also have scenes of full-on emotion. All that stuff is a gas, you know, playing dress up and putting on a holey costume and a big fake beard, it’s fucking great.

Jon is a departure from the other characters you’ve played in the past – is the opportunity to play different sorts of people part of the appeal of acting to you? You wouldn’t want to be on a soap opera for thirty years playing the same character.

I’m sure other people do, but I don’t. It’s fun purpose-building a character for a movie and then turning up with him, and knowing you can do whatever you want with him because it will fit, because he suits the movie. And then to let it go and move on to the next one. It’s always scary, which is good. You want to be scared. Look at Michael’s career choices or Maggie Gyllenhaal’s career choices: they’re people that challenge themselves all the time. People talk about longevity like it’s all about what other people will give you but I think it’s also about keeping yourself interested and hungry as well, because if you play the same part over and over surely you’ll just get bored and hate your job. Your interest will drop. Variety is as much for yourself as for other people, and hopefully I’ll get to continue doing this for a while. Of course, you never know. I could be unemployed next year. But we keep our fingers crossed.