“When you’re a kid no one fucking expects you to do anything. Nobody relies on you for anything. Whereas when I was nine, I was relied upon to be on set every day and know my lines and to be a part of keeping a whole huge machine running smoothly.” The nine-year-old in question was Daniel Radcliffe, and the huge machine was the Harry Potter franchise, still the most financially-successful film series in history. Coming from any other former child actor you might expect this to be the start of a tirade about their lost youth, but Daniel is trying to explain how the experience led to him being a happier adult. “I really enjoyed that responsibility. I enjoyed the fact that it was something I loved and I got to go to a place that I cared about.” We’re generally unsurprised when child performers fly off the thread. In part this is because it’s a dispiritingly familiar narrative, and in part it’s because, well, why wouldn’t they? When a person becomes world famous before they’ve even started puberty, it’s no great wonder to see them end up turning to bitterness, religious fundamentalism or drugs to quell the peculiar hangover of their youth. With this in mind, the strangest thing about Daniel is that he doesn’t seem to be strange at all. From his eight cinematic appearances as the eponymous boy wizard through to his later pursuit of a diverse series of stage and screen roles, his life in the public eye has been almost entirely devoid of controversy. “I think a lot of people do wonder how we didn’t go off the rails when we were that young, how fame didn’t fuck us up,” he says. “My answer is that for a lot of the time we were working. I used to say this back then and it’s absolutely true: I only felt famous for about two weeks a year during Potter, when the film would actually come out and I’d go and promote it. The rest of the time it was all work.”

There’s a lot one could say when attempting to describe Daniel—that he’s articulate, engaged and energetic, that he peppers his conversation liberally with quotations and swearing, that he’s about the size of a hat—but the most immediately obvious thing is that he’s incredibly polite. My grandmother would love him. Labelling a person as polite sounds dismissive, insinuating a certain obsequiousness, but it’s his best quality. He’s polite in a way that suggests compassion and sensitivity. One gets the sense that the quality took early on and never left: he talks with conviction about formative experiences working with badly-behaved actors and resolving to avoid their example.

Whenever conversation turns to Harry Potter, which happens with understandable frequency, Daniel gives the impression that he was unhappy for much of the time. Obliquely negative references to his adolescent life creep around the edges of his sentences. The only refuge from a tumultuous youth, he explains, was acting. “I remember particularly in the early days when I was still really not enjoying school I would just sit in my school room on set and I’d know… I’d recognise the runner who was coming to get me. I’d recognise their footsteps and know that I was going to set, and I’d just be so excited.”

Daniel talks about the set in an almost talismanic manner. As he became increasingly well known the gap between him and his peers grew concordantly, which makes it understandable that he longed for an environment where he was viewed primarily as a co-worker. “Because I was an only child, I’d always been quite good at talking to adults. It was something I always relished, not being patronised. And as soon as I was about fourteen and people could swear in front of me they treated me like any other person on set,” he says. “At school the world is divided into who’s cool and who’s not, and on set everyone just got on with it. It was much more like the real world and I immediately liked that about it. Set was like a sanctuary for me, and whatever else was going on in my life as a teenager I could always forget about it when I was there.”

Perhaps it’s because he’s had so much of it, and for so long, but Daniel says he never felt seduced by fame. “The danger for people who become famous very young is that it becomes a part of their identity, and it’s a fleeting thing.“ I ask if it’s strange to move through a world where everyone knows your name, and he says yes before I can finish the question. “It makes you slightly uncomfortable because you feel like you should know them as well and you don’t. That said, you get used to seeing yourself on posters and buses. It’s an odd thing to say but you just do. It’s almost like you see a different person after a while. But even though you get used to certain aspects of it, there’s no part of it that stops being weird, and I think that’s right. You should always be finding it weird. You’ve got to acknowledge that this is not a normal way to live.”

Other than the discombobulation that arises from being one of the most recognisable figures in the country, another side-effect of having your own movie franchise from the age of nine is that everyone’s opinion of you has been settled for years, based largely upon the work you did as an unseasoned actor. Daniel is sanguine on the subject: “For a long time I was still obsessing over little bits and pieces that I didn’t like of those films, and I just had to accept at a certain point that basically my acting lessons, both good and bad, are all committed to film. That’s what I learned in front of people for ten years, and there will be some moments in it that I’m really proud of and some moments that I go, ‘Oh my God, what are you doing?’ But you learn and you improve. That’s the only way you can grow.” 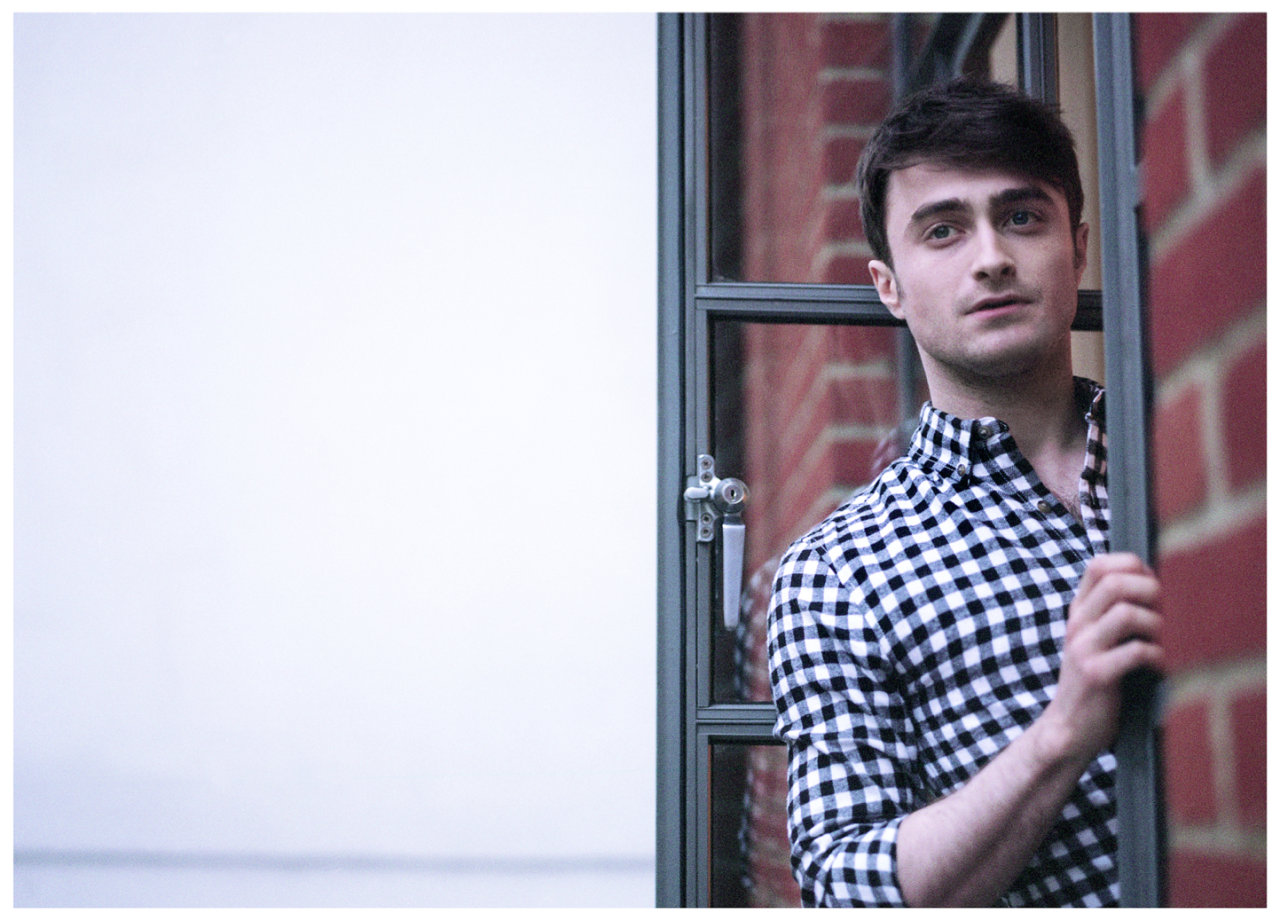 Daniel thinks a lot about his development as an actor. It’s not that he’s insecure about his abilities, but rather that he’d like his best performance to be ahead of him. “That’s what I’m battling against really. Towards the end of Potter I used to get asked a lot if I felt like I’d peaked. ‘Fuck no!’ was my reaction. I don’t want to have peaked at 21, although in terms of commercial success I almost definitely have. But that’s not how I define it and it’s not what matters to me the most.” He concedes that it’s easy to not care about commercial success when you’ve already had an unprecedented amount of it. “I know so many people who are either looking for a franchise or are incredibly relieved because they’ve just got one,” he says. “It makes your career. It’s important to stress that the reason actors like to do franchises isn’t just because it makes them loads of money and really famous. 99.9% of actors have absolutely no control over what they do. If they get given a shitty script and someone’s paying them, they have to say ‘Great, thank you, I’ll do it.’ I’m in a very fortunate position where I’m able to do things that I’m passionate about. That’s the freedom that it gives you in a massive way and so I’m very relieved to have done mine early.”

He has used his freedom to good effect. The projects Daniel has chosen outside of Harry Potter are marked by their variety and idiosyncrasy, from playing a young Allen Ginsberg in Kill Your Darlings to his eleven months on Broadway starring in the musical How to Succeed in Business Without Really Trying. “Doing things that are a bit bolder is just part of my make-up, particularly at the moment,” he says. “What excites me is breaking new ground for myself, and I’m interested in following good stories and good material.”

This strategy has increasingly led Daniel to smaller independent films, but he claims that the experience is generally the same. “Every film shoot is chaos, whether you have $3 million or $300 million, and you’d better like that or you won’t enjoy the industry. The only differences are superficial things, like how long do you have the crane camera for. On Potter we had two cranes every day, just lying around whether we were using them or not, and it never struck me as odd. Then of course I get onto another film and I hear people talking about renting a crane for a day and realise that the budget of the film wouldn’t have covered the visual effects of one scene in Harry Potter.”

Of his upcoming, typically varied roles, which include Igor in a grisly retelling of Frankenstein and a murder suspect who wakes up with horns and paranormal abilities, his most surprising is also the most straightforward, co-starring in the romantic comedy What If. A sweet, witty, sharply-written film—albeit a rather conventional one—What If features Daniel as a medical school dropout trying to hide his feelings for his new friend Charity (Zoe Kazan). After playing several troubled characters, seeing him as a romantic lead is an unexpected pleasure. Rather than the physical challenges he’s faced in other recent performances, Daniel found himself pushed instead by the need to play a character that audiences would find actively appealing. “You definitely don’t think of it like that. Always the best thing to do if you’re trying to remove self-consciousness is to concentrate on the other person in the scene. So rather than thinking, ‘Am I being charming enough?’ I would just think, ‘I’m going to try and charm you. I’m going to try and make you laugh.’ That’s what most of the film was for me, going to work trying to figure out how I was going to make Zoe Kazan laugh that day. Which is a great job to have.”

More than the politeness, even, what comes across most clearly about Daniel is his passion for acting. Even as an adult, there remains a tangible sense of a boy who was unhappy at home and happy at work, who accordingly decided to treat the latter as a sort of gift. “I’m lucky that I have job I love and I know that if you want to succeed in this industry you have to work really, really hard. And I’m good at that. I like it. So I just throw myself in.”

But what does succeeding mean when you’ve already been the star of the biggest film series of all time? What’s a goal? How do you structure the rest of your life? Daniel pauses for a moment. “Obviously I’m not financially motivated any more. And commercial success isn’t the be all and end all, although you still want people to go and see your movies. Essentially I just want to keep getting better and better at my job, and I’ll do that by continuing to work with a wider group of people and on different projects and varying the things I do as much as I can. Success to me is if I can work for the rest of my life. That would be a good, successful life.”