“You can’t always be Hamlet; sometimes you have to play a talking refrigerator.” Alfred Molina graduated from drama school 39 years ago, but he tells the story as if it happened last week. “One of my acting teachers said that. Of course, it got a big laugh. He said that the important thing was to not look down on those moments and think they’re beneath you. I was very young at the time, in my late teens, and didn’t quite appreciate what he was trying to communicate. I realise now he was talking about self respect and taking pride in your work, applying your craft with the same dedication, effort and concentration to every job regardless of what it is. The trick is to be the best talking refrigerator you can be.”

Alfred emanates good advice. He can’t help himself. One gets the sense that he’s held on to every shred of wisdom he’s received. His conversation abounds with references to former teachers, acting colleagues and old friends who have had something useful to pass along. Over a tremendous four-decade career, in which the actor has played Hamlets, refrigerators and everything in between, it’s clear that the early lessons stuck. Alfred’s large body of work, which includes roles in everything from Raiders of the Lost Ark to An Education to Boogie Nights, has been defined by the gusto he brings to each part. “I’m definitely a very different actor now than when I started, but what remains constant is that I still get excited by the job.” 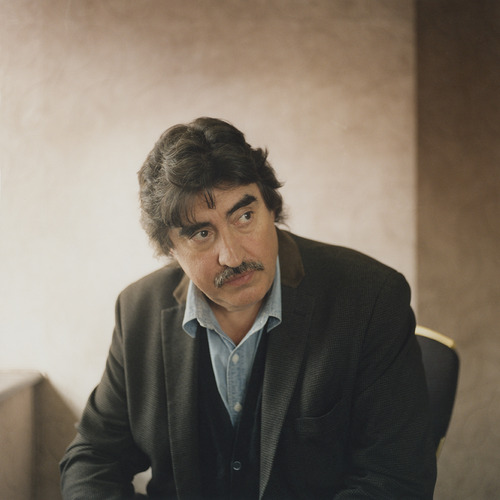 Maintaining such enthusiasm over a long career is difficult, and Alfred has seen the fire go out for several of his peers. “There’s no judgement involved here: it happens for all kinds of reasons and it’s important to bear that in mind, because it’s not that actors become lazy necessarily,” he says. “It’s often that the job becomes hard. We all get older and our energy levels aren’t the same. It can be a very physical gig.”

He mentions his time on the TV drama Monday Mornings, in which he played a hospital’s chief of staff: “I was joking with the producers and said, ‘I’ve reached an age where you can just stick me behind a desk and I’ll do a lot of shouting and pointing. I’m really good at that now. All the youngsters, they can do the running and jumping. I’ll just shout and point.’ They kind of took me at my word, and I ended up with all these scenes where I had big long speeches haranguing one person after another. But it was okay. You develop different strengths. You eventually become the actor you were destined to be.”

Alfred has avoided languor by finding how to conserve his energy and be more efficient. “When I was young I would run in like a bull in a china shop. On the first day I’d be all pistons going, all engines firing, and then by the second I’d be exhausted with a ton of work still to do. You learn which battles to fight as well as how to fight them.”

Due perhaps to his dexterity with accents, marauding eyebrows and bearish carriage, Alfred has played his share of villains, but in person he laughs generously and conveys both warmth and gentleness. He’s the sort of figure you’d want to run into if you scraped a knee or lost your wallet. Manners are as important to him as the work he puts in. “Sometimes it’s hard to figure out the right way to do something and you find yourself struggling. I’ve been on lots of sets where actors will suddenly shout out because they’re so frustrated. What’s important is to not lose your rag at your inability to nail the performance and then turn around to someone and go, ‘You! It’s all your fault!'”

As frustrating as those difficult moments are, Alfred believes they’re the key to remaining enthusiastic. “About ten years ago I was talking to an actor friend who’s much older than me. I asked, ‘How do you stay fresh?’ and he said that when offers come in you should always try to take the least comfortable one.” If every job might have something more to offer, Alfred understood, then he wouldn’t get bored or stale. The stance is an admirable one, but he concedes that practical considerations have a bearing too. First and foremost he’s a working actor, which means popping up in all sorts of projects—sometimes it’s Magnolia, sometimes it’s The Pink Panther 2.

After dozens of roles in every medium it might be difficult to identify specific turning points in a career, but Alfred immediately brings up playing Doctor Octopus, the tragic yet diabolical villain of Spider-Man 2, who he played a full thirty years into his career. Yet the part introduced him to a whole new audience. He explains, “Before then I’d mostly done smart, high-end independent films that were well-regarded but didn’t make huge amounts of money.” In contrast, Spider-Man 2 had the highest-grossing opening day in history at the time of its release. “It was just a massive, massive undertaking; at one point we were occupying seven sound stages on the Sony lot. You soon realise the actors are a small cog in a much bigger machine, but once you’ve embraced that you can have a wonderful time.”

A decade on from Spider-Man, another turning point has presented itself with Ira Sachs’ family drama Love Is Strange, one of this year’s best and most affecting pictures. Alfred co-stars with John Lithgow as George and Ben, a couple who are forced to live apart when they lose their flat as a result of getting married. While their predicament is a consequence of discrimination, the film is more interested in depicting the nuances of the pair’s long relationship than underlining the injustice of their circumstances. For Alfred, who has been involved in gay rights activism for several years, the emphasis on the commonplace was part of the appeal. “Everything that happens to the characters are things that happen to all of us. Their crisis isn’t insurmountable, nor is it life-threatening. George and Ben are quite delightfully ordinary in a way that is reassuring and recognisable—these are people in the world. It would have been less of a film if they’d been special.”

Instead of Love Is Strange relying on unrealistic narrative convolutions to provide interest, Alfred feels that the film’s power comes from exploring what’s extraordinary about the ordinary love at its centre, and that this is what the title refers to. “I like to think of it in the Shakespearean sense. In Hamlet, Horatio says, ‘O day and night, but this is wondrous strange!’ where strange means something magical and mysterious and ultimately wonderful. You have no understanding of how it’s happened or why but it fills you with joy. That’s what I take from the title, and that’s what love is. It’s some indefinable thing that saves you, that protects you and gets you through life. And that’s the same for anybody.”