Stranger by the Lake takes place in that late, languid stretch of summer where every day feels like every other day. Set entirely at a gay cruising spot in rural France, the film follows Franck (Pierre de Ladonchamps), whose daily excursions to swim, sunbathe and have sex with strangers are complicated when he witnesses a murder and subsequently falls for the killer. A complex film that is by turns funny, sad, erotic and suspenseful, Stranger by the Lake is notable for its measured tempo and its unselfconscious and frank portrayal of sex. Ahead of the film’s unseasonable February release, we spoke to director Alain Guiraudie about the production.

The film has a murder at its centre and is peppered with casual sex, and yet it feels loving, affectionate even.

It has a softness, definitely. A gentleness. The other day I was talking with friends who worked on the project from the beginning and they said when they initially read the script they thought it was going to be much harsher.

Was it a deliberate intention to avoid a sensationalist tone?

Yes, it’s a film I made without any desire to be provocative or wanting to shock at all. I wanted things to happen quietly, for events to unfold in an obvious but gentle way.

Even the actual murder is shot from a distance. You don’t really see or hear it properly.

That’s the image of the film for me. I like the idea of the drowning scene because it starts quite playfully and then turns into tragedy. It was important that it took place at a distance from the eyes of Franck and his perspective, so that his point of view becomes our point of view and we can identify with him.

Franck is a passive, reactive character, and accordingly Pierre de Ladonchamps’ performance is very subtle. How did you bring that out?

I directed Pierre a fair bit but at the same time not that much. There’s something in him that’s very complex. He has a lot of layers. An interesting thing I noticed on set is that as an actor, if he does nothing he appears to be worried. There’s just something dark that’s in him at rest. And so I had to fight his natural appearance of anxiety. 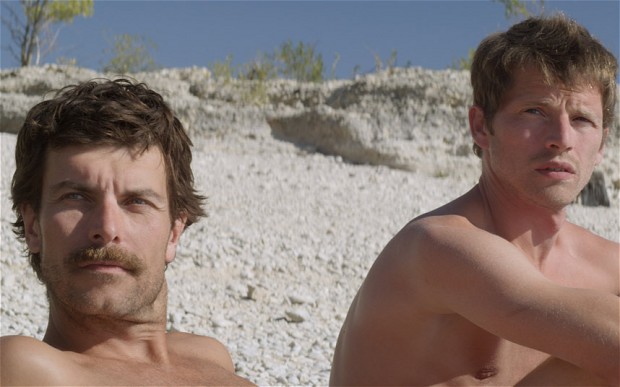 The film’s pacing is quite deliberate. Events build slowly and steadily over time, and you repeatedly return to shots like the one of the car park, its number of cars rising and falling. What were your intentions in structuring the film the way you did?

Pacing is something you discover at the editing stage between the editor and the director. It comes quite intuitively. But what we knew we were working with was this laid back, lazy summer atmosphere. The lake is always the same but it’s not the same, because of what happened the day before. We also wanted the days to be structured by the light changing, and to arrange the film geographically: you have the parking lot, the pathway, and then the beach, and little by little things are simplified. You don’t see the parking lot any more, and then you don’t see the pathway, and then you only have the beach.

You shot the entire film outside. Was that difficult? How did you respond to the weather and the variable sunlight?

I really enjoy filming in the open air, and I thought that by going to that particular region I would have better weather than we did. In the end I think it worked well, though: the fact that we didn’t always have fabulous weather contributed to the images. The real challenge when you use natural daylight is to be absolutely ready for specific shots in that specific light. You have to shoot very quickly in a limited number of takes. Generally you want to be ready with your actors when the light is ready, but if you’re not ready with your actors you have to just go for it anyway. The lake is essential to the film. What were you looking for in a location? How did you find it?

What determined the choice was simplicity: the size of the human side, a location where the other side of the lake wasn’t too far away. Actually, the first time we found the lake there wasn’t a beach at all, because the initial location scouting happened in the spring, in the rainy season, and we were filming at the end of August when it was completely different. Luckily we saw it again on the day when the lake’s water level went down sufficiently, and nature had changed it.

Stranger by the Lake is very sexually explicit, and the characters spend most of the film naked, but you don’t draw attention to this at all. Why was it important to you to depict sex and the human body in a natural, almost casual way?

I generally try to show things in movies without the aspect of fabrication. I don’t want to create the impression of doing things especially for the audience. Of course, when you’re dealing with scenes of intimacy such as sexual acts it’s difficult for the actors to perform whilst facing the eyes of others. And I also think you could fall very easily into cliché or outrageousness. But there was an interview I read with Bruce Dern where he said that someone who can’t be intimate in public can’t be an actor. It’s interesting because I was talking to the actors when we were working and they said that there’s not much difference between pretending to make love and actually making love, apart from the sexual organs and one thing going into another. Physically the mechanics are different, but it’s the same emotionally. It’s still sex.